Queen Bastet invited Kadhi into her bed in order to begin to shed the trappings of priestesshood…Kadhi was jazzed; Emil was bummed.

Also Athena gave her some tough love about always praying to solve her problems, and Bastet took up painting for stress management. 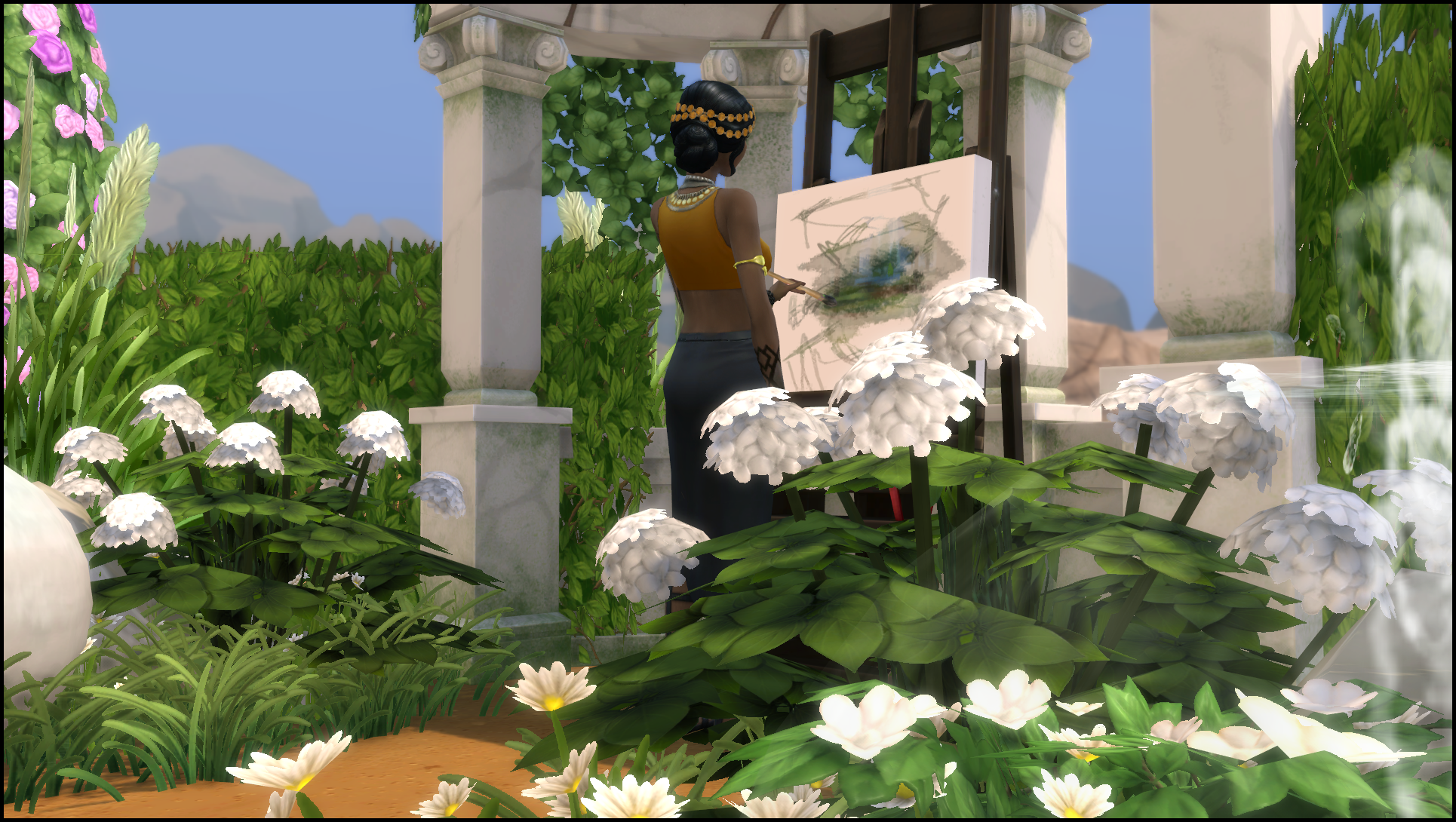 As the hours passed and her tension began to melt away, the young queen felt her spirit lighten once more; painting, it seemed, was the panacea she hadn’t known she needed.

The hours turned to days, and Athena’s servant had to admit she’d never felt so worthy of her Goddess than when she was contributing towards her tribe.  As her painting skills increased, she was able to add valuable funds towards the improvement of the settlement.

Repairs were made to the roofs so that they did not leak, and an addition was added to the queen’s chambers to house the future Princess… 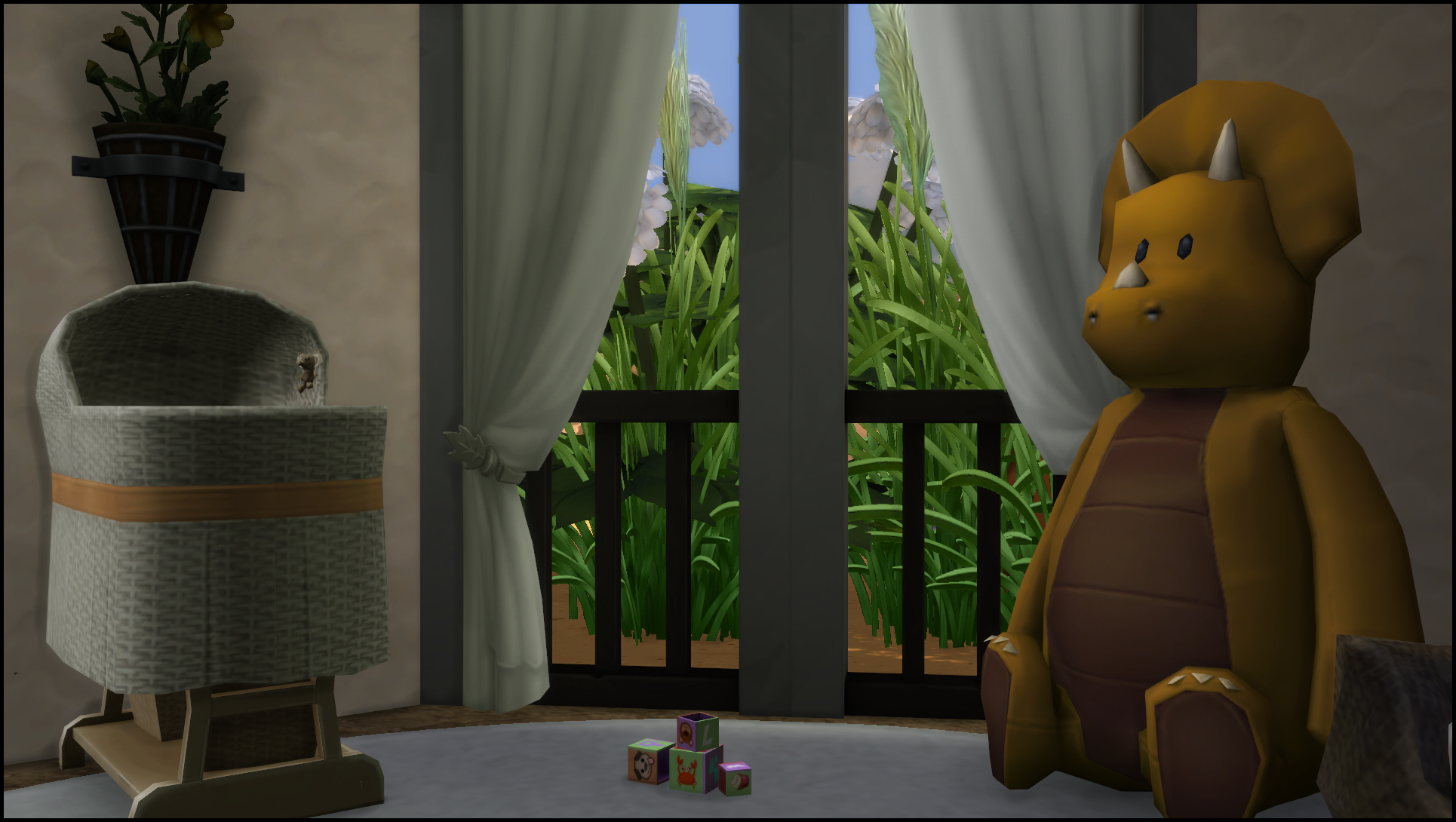 …which quickly began to overflow with toys and furniture. 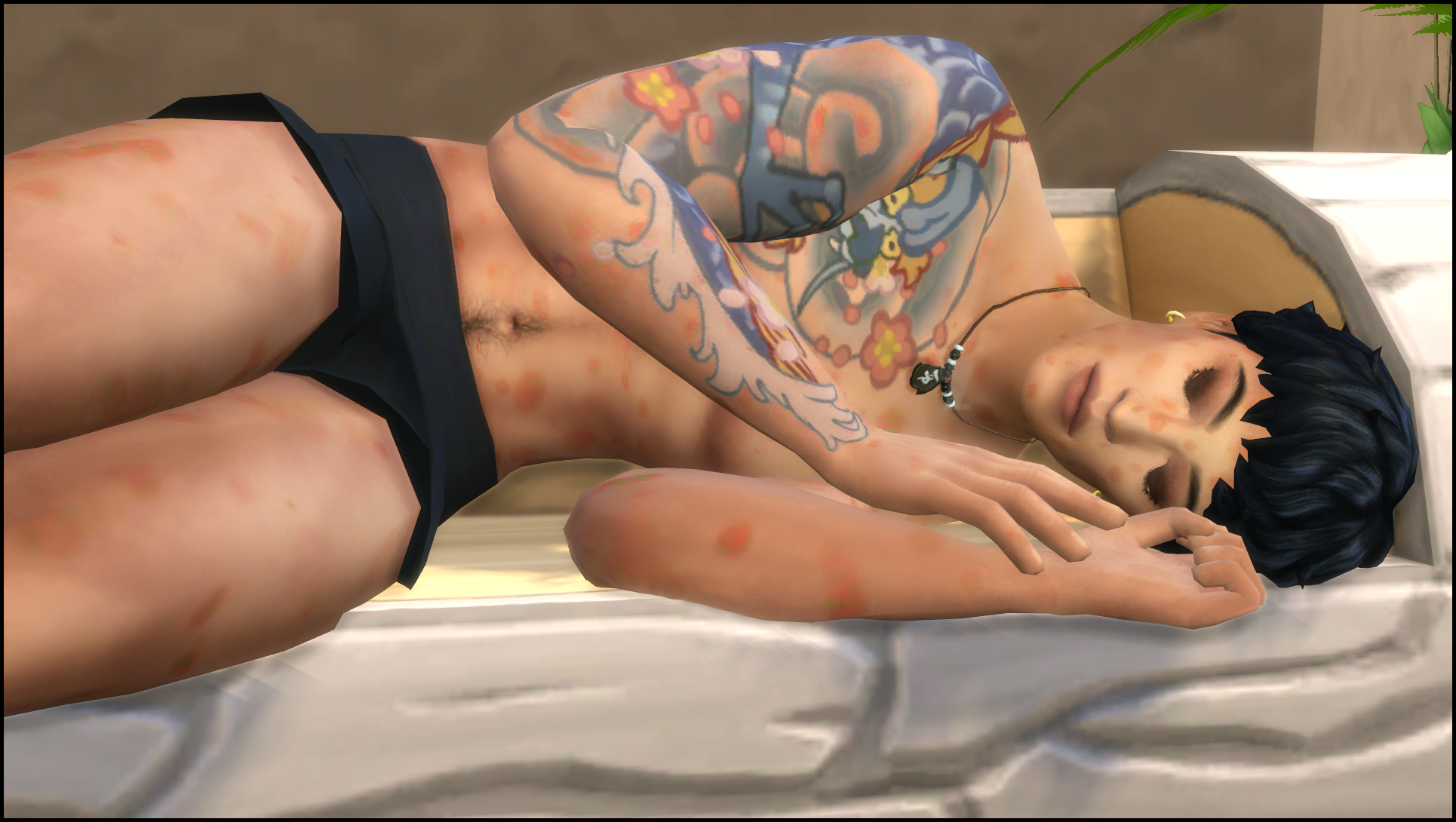 Kadhi’s illness worsened and he took to sneaking naps in the kitchen where he was less likely to be noticed. 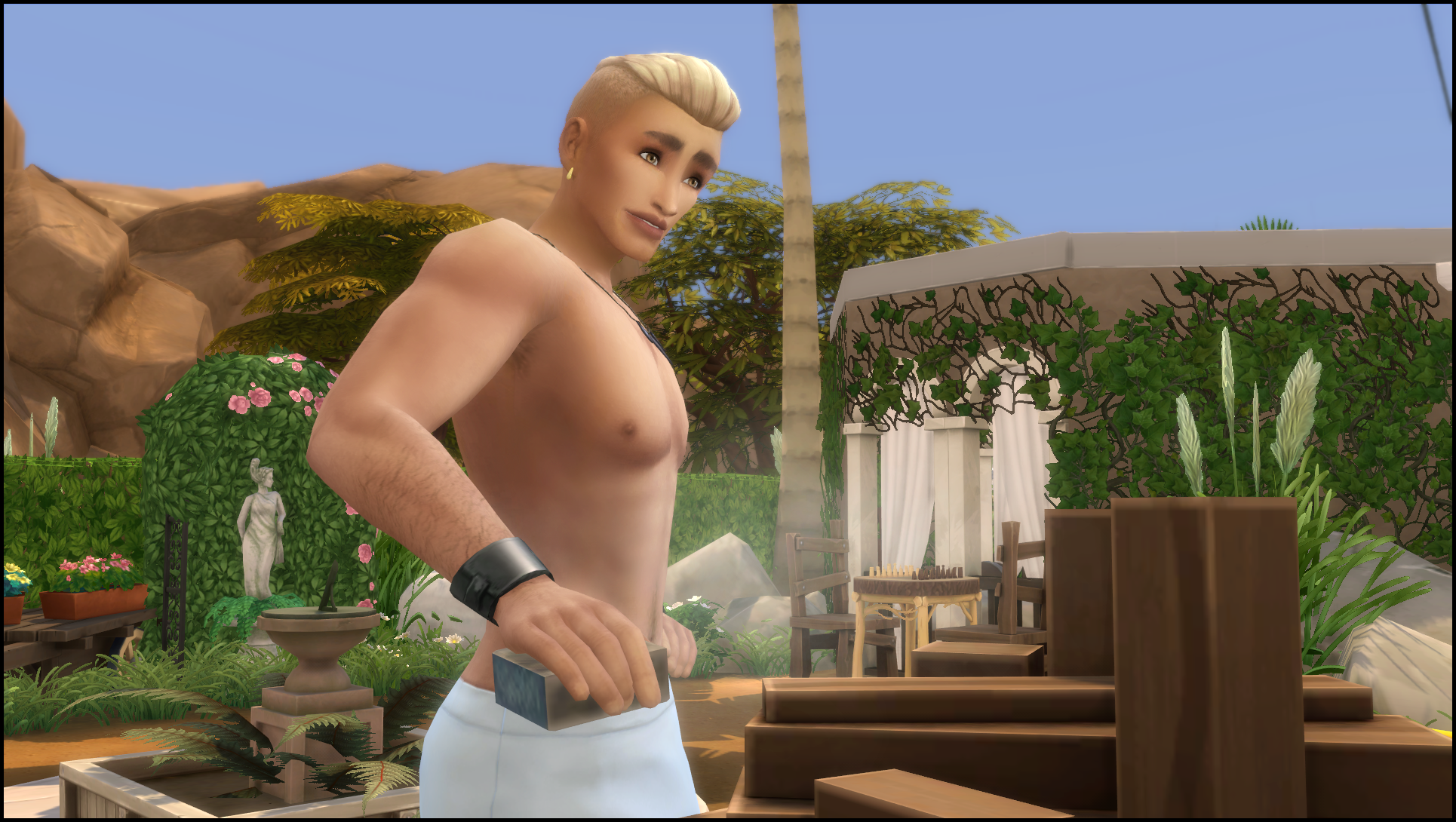 Though Emil was jealous of Kadhi’s position as the Queen’s lover, he did not wish ill upon his ailing friend and promised to pick up any slack so that the other slave would not lose favour.

He knew the other man would do the same for him, and knew also that Athena would see this kindness. 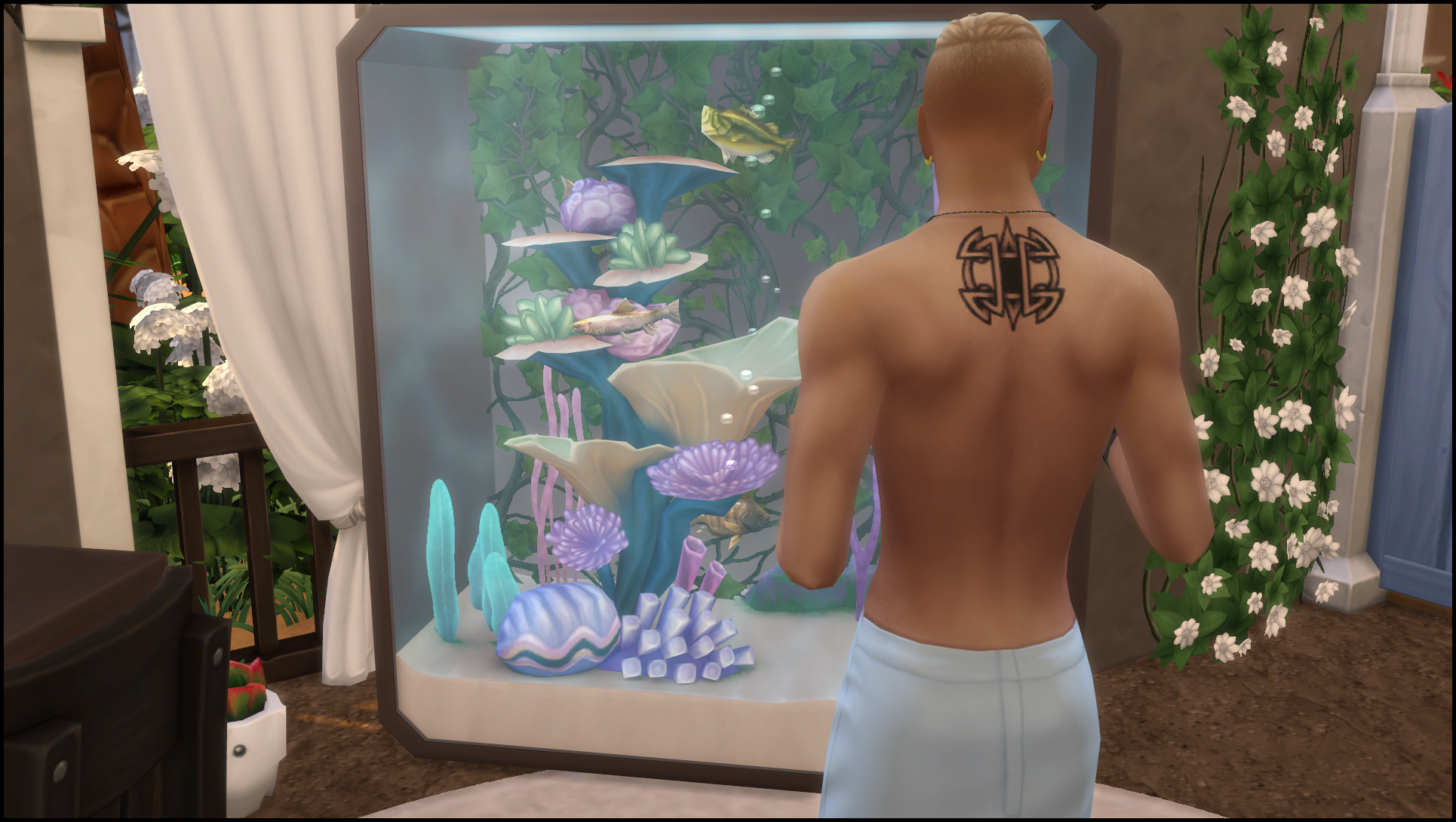 Emil’s Fine Gift was now brimming full of colourful, rare specimens; he made certain that it was always spotless for his Queen. (Sometimes even 10 washings in a row were not enough, apparently.) 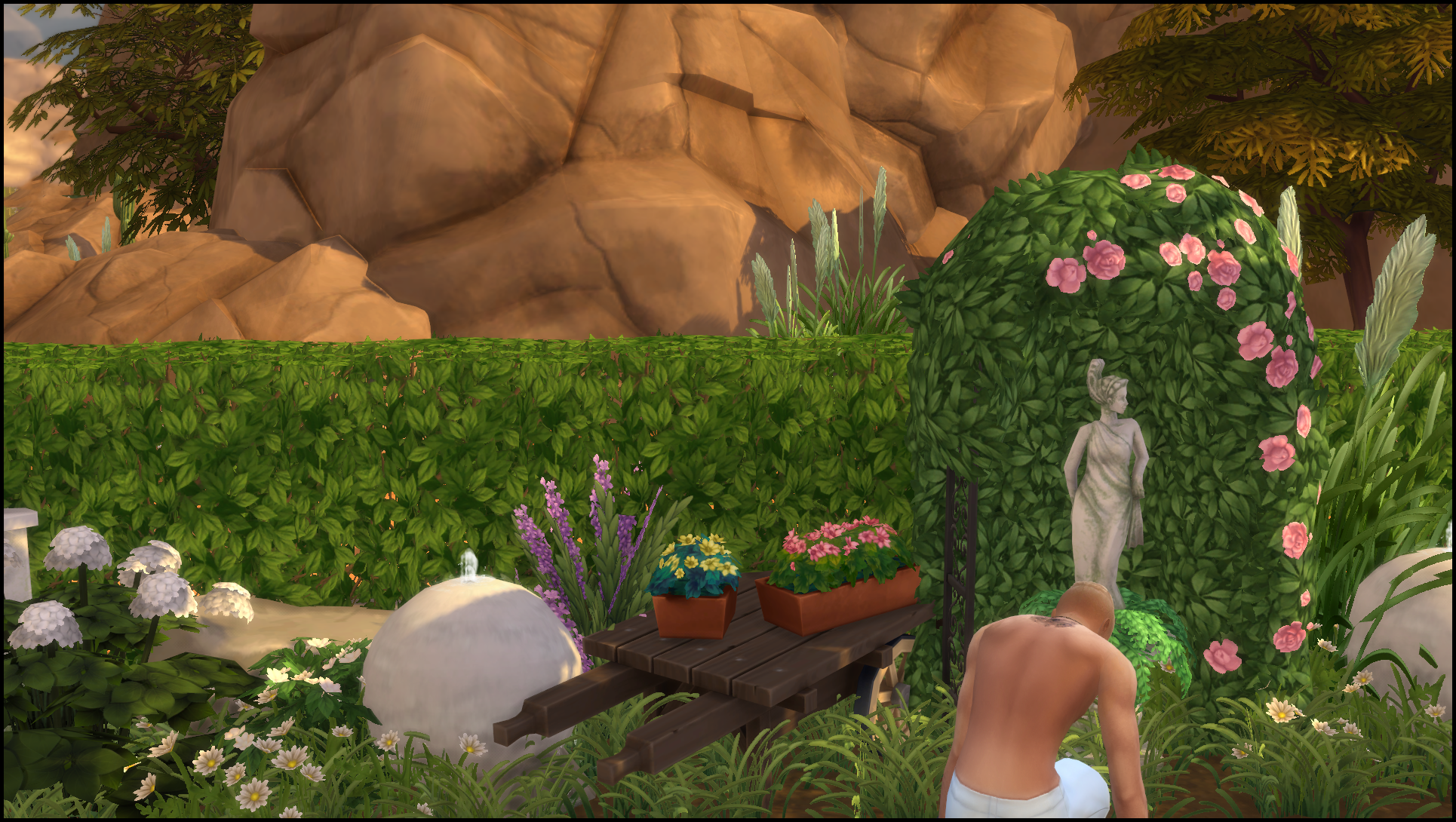 The garden that Kadhi had planted was thriving.

Emil worked tirelessly to help care for it when he was not fishing; with less work to do, Kadhi could rest and hopefully recover more quickly. 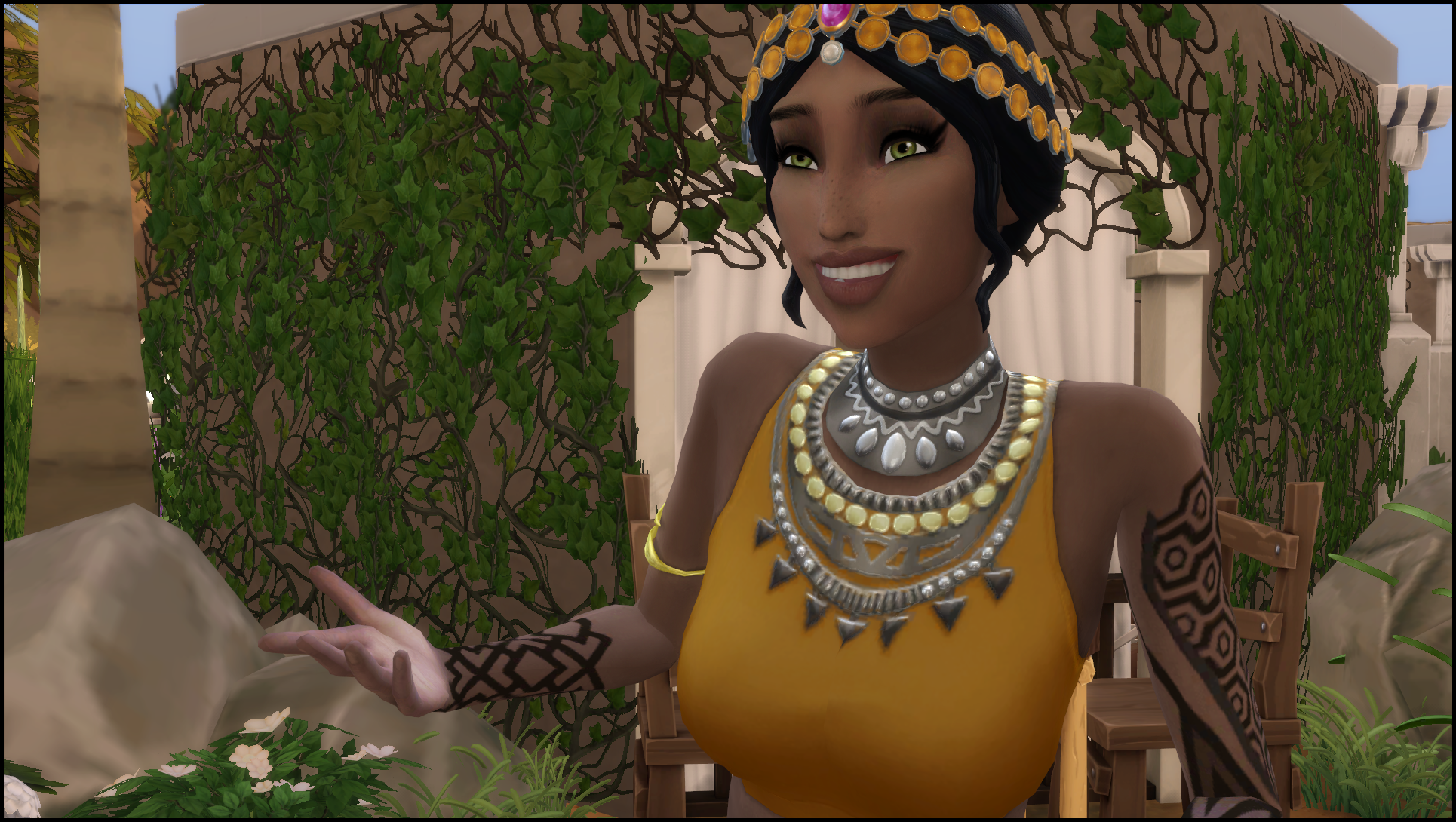 Bastet was an observant woman, and took notice of this exemplary behaviour.

“So I was thinking that you should get some kind of reward for all your extra work, Emil…but you know, I spent pretty much all our money on baby stuff.” 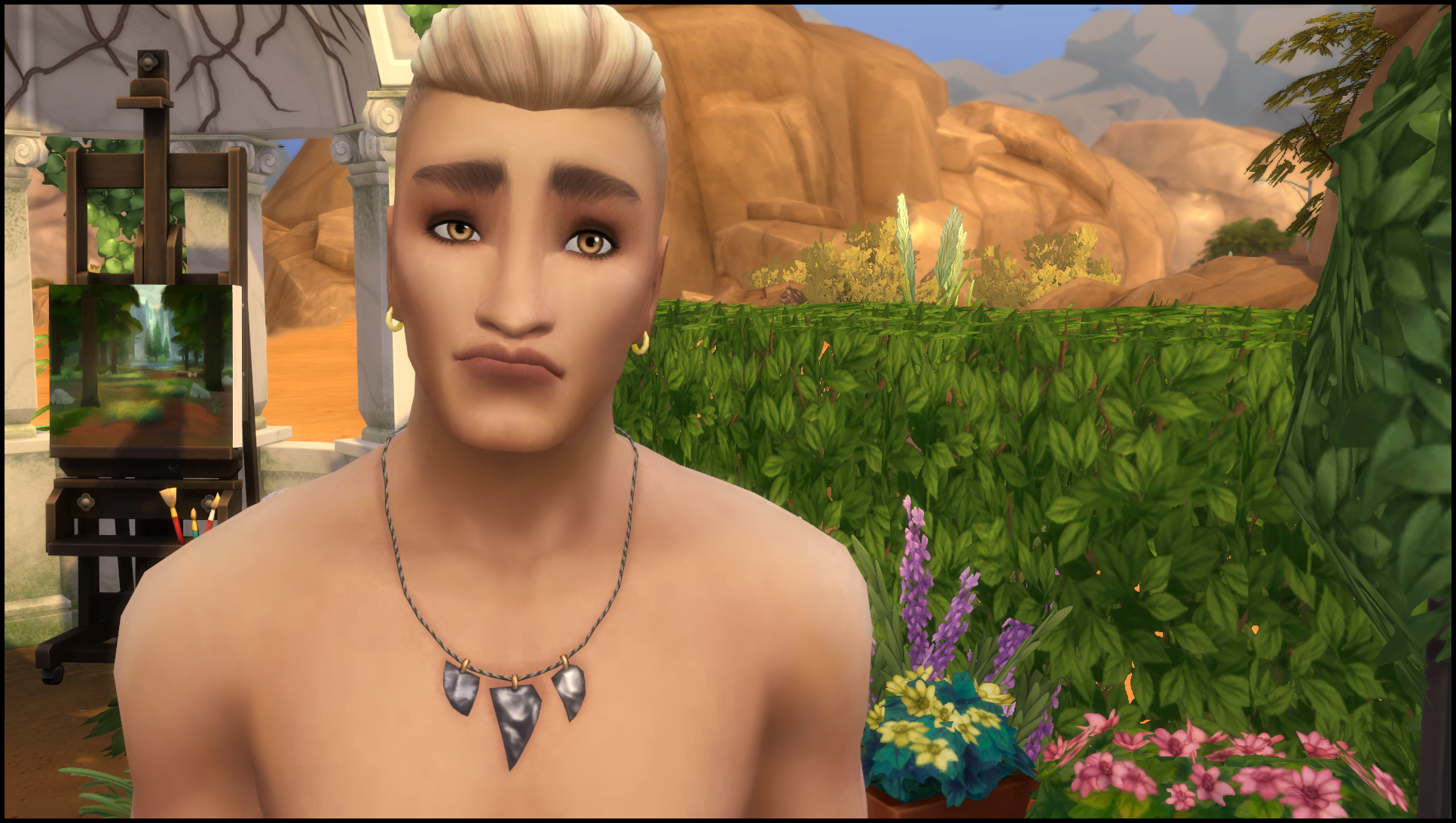 “All the reward I desire, my Queen, is being worthy of your notice.” 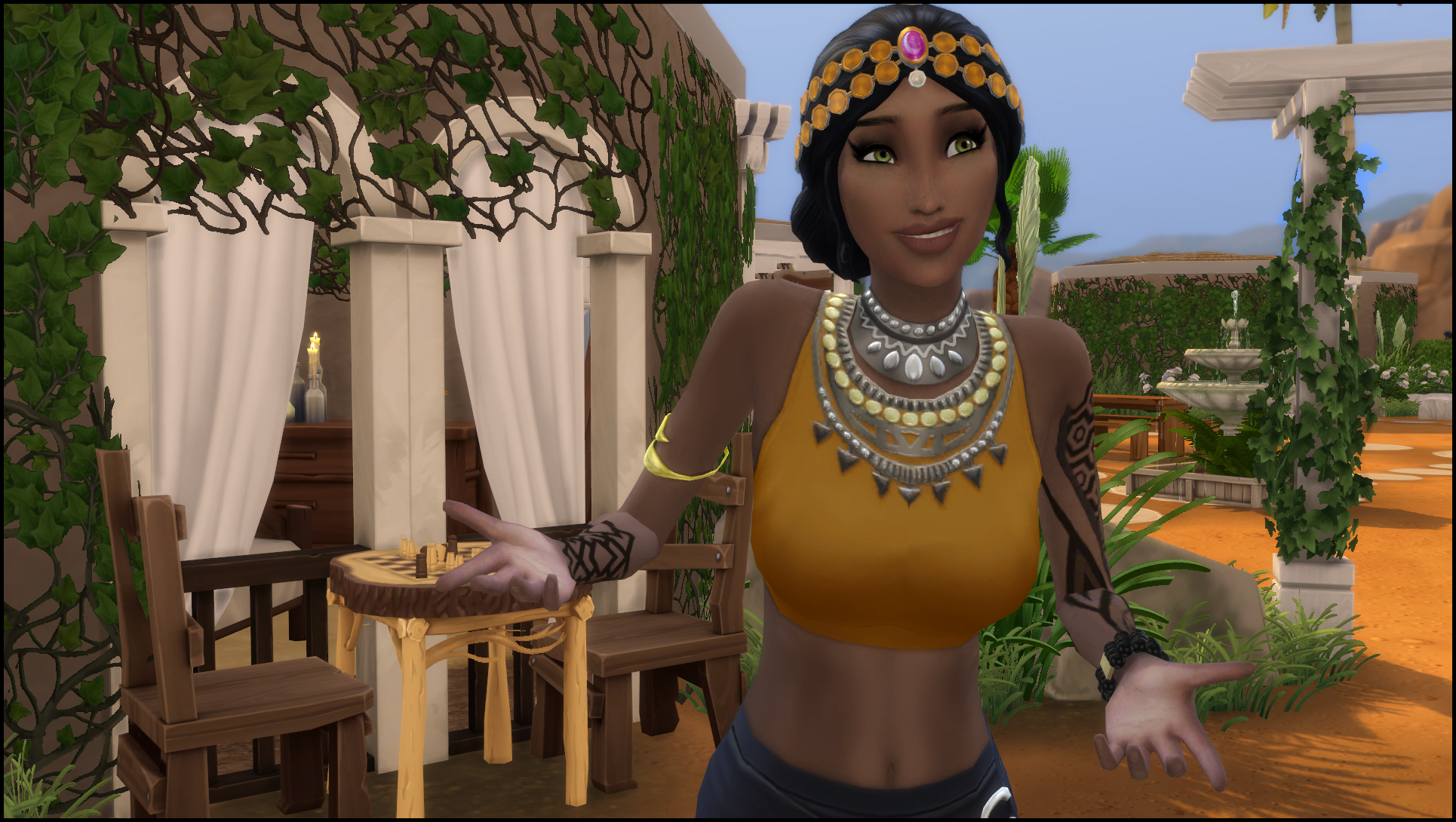 “Yeah, totally, but I’m thinking some woohoo might be fun for both of us if you’re up for it.”

Kadhi had been ill for many weeks, and was not in possession of the necessary fortitude to gratify his mistress.

Having sampled the delights of woohoo, Bastet found herself rather missing his attentions. 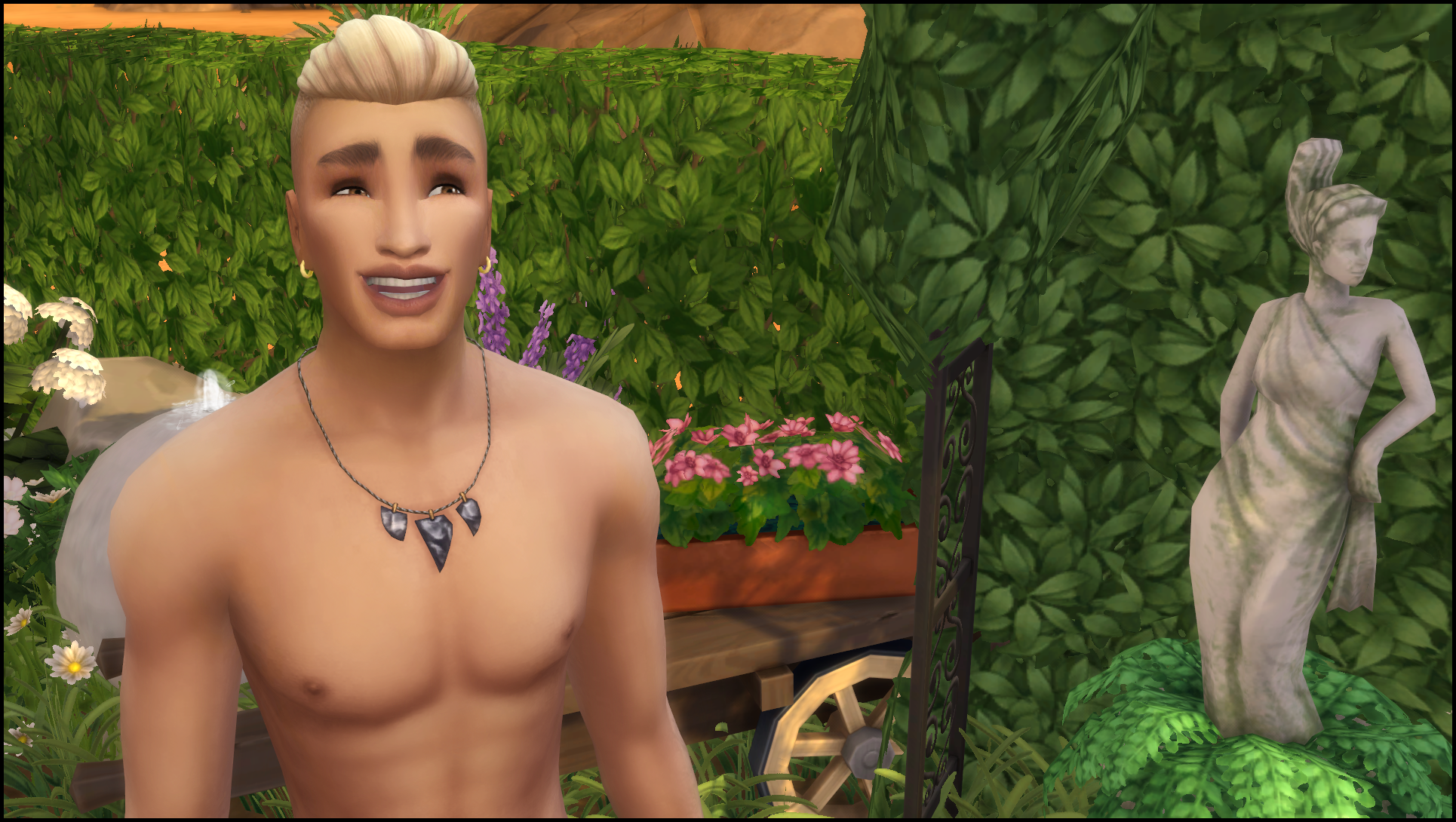 Emil was overcome with joy that he would be allowed to serve his mistress in this fashion, though he felt a pang of guilt for prospering from Kadhi’s misfortune. 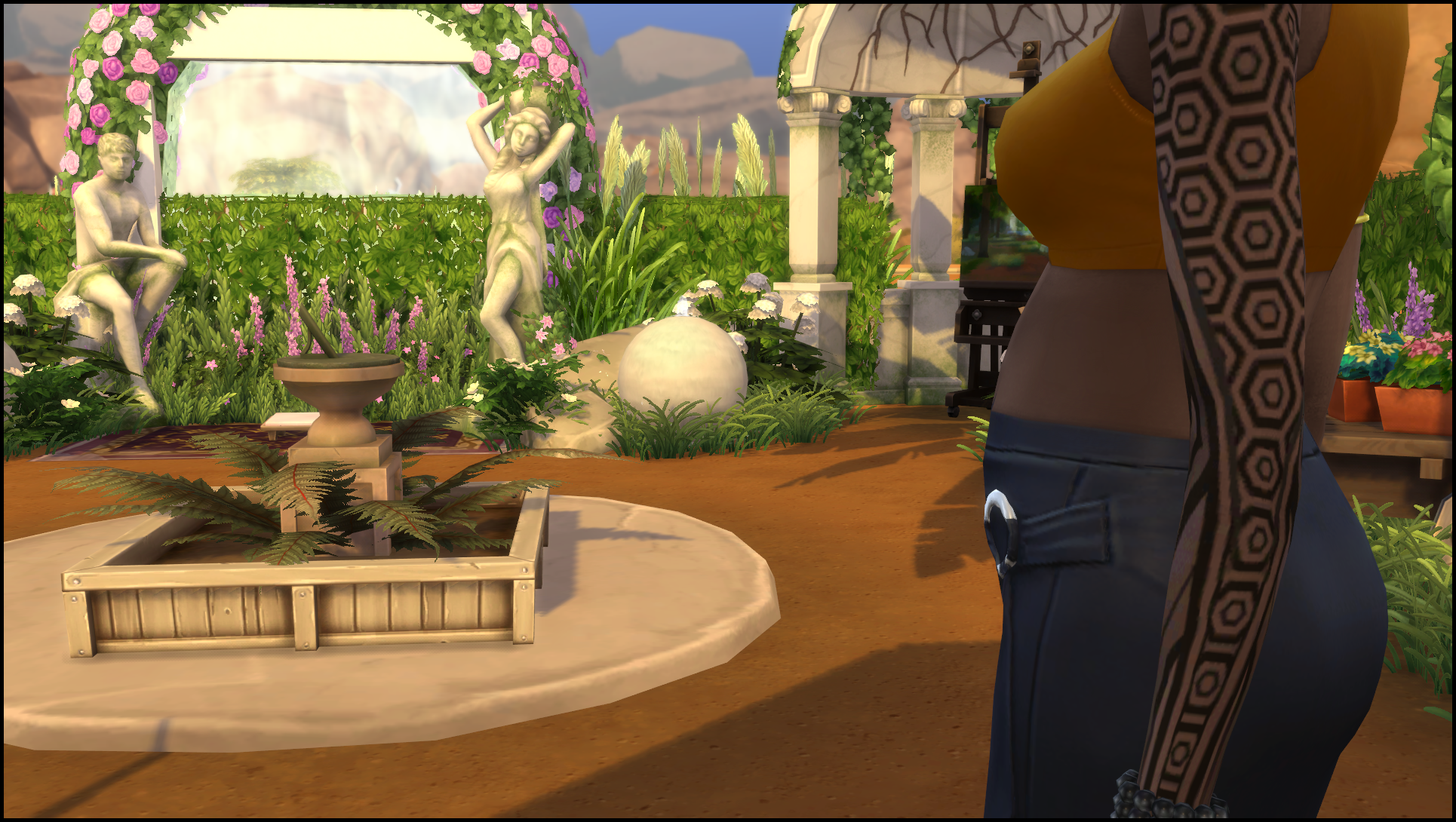 It was not long after taking Emil to her bed that Bastet began to see the signs that a future Princess of Sim-Mighdall was on her way. 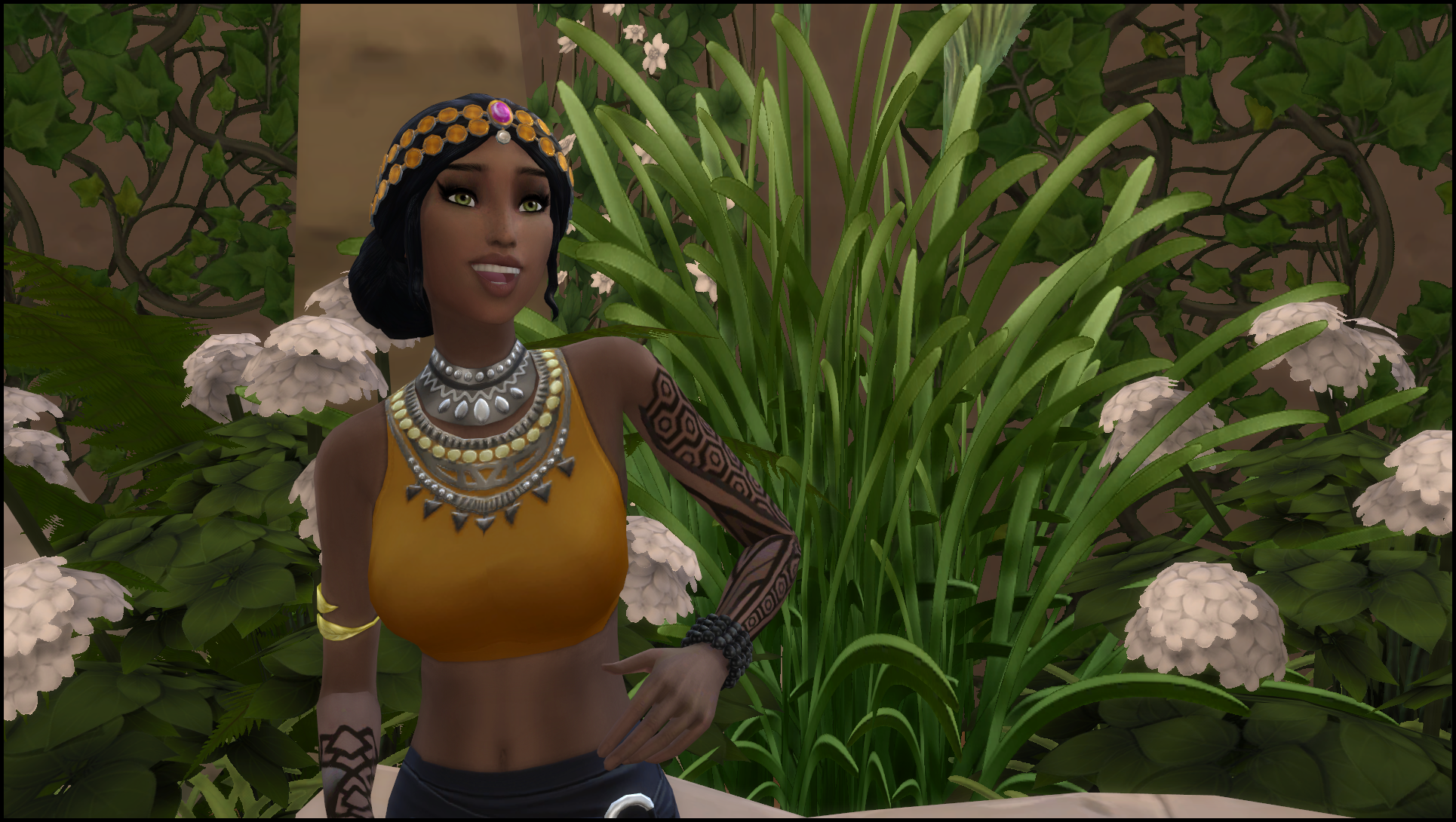 The Queen called a meeting to speak with her slaves about the impending birth.

“So here’s the deal; I’m definitely knocked up…” 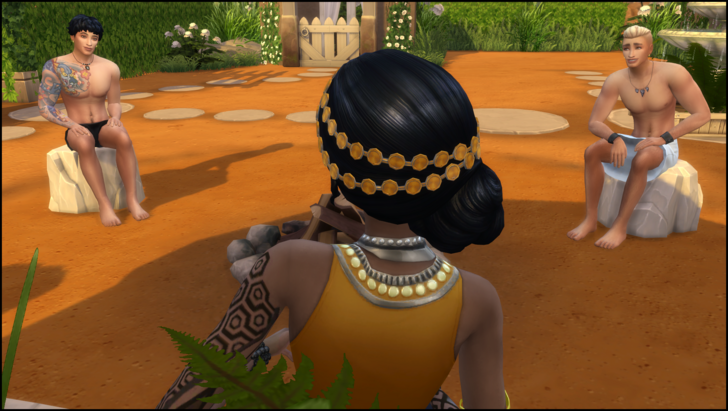 “…and I don’t actually know which one of you is the father.” 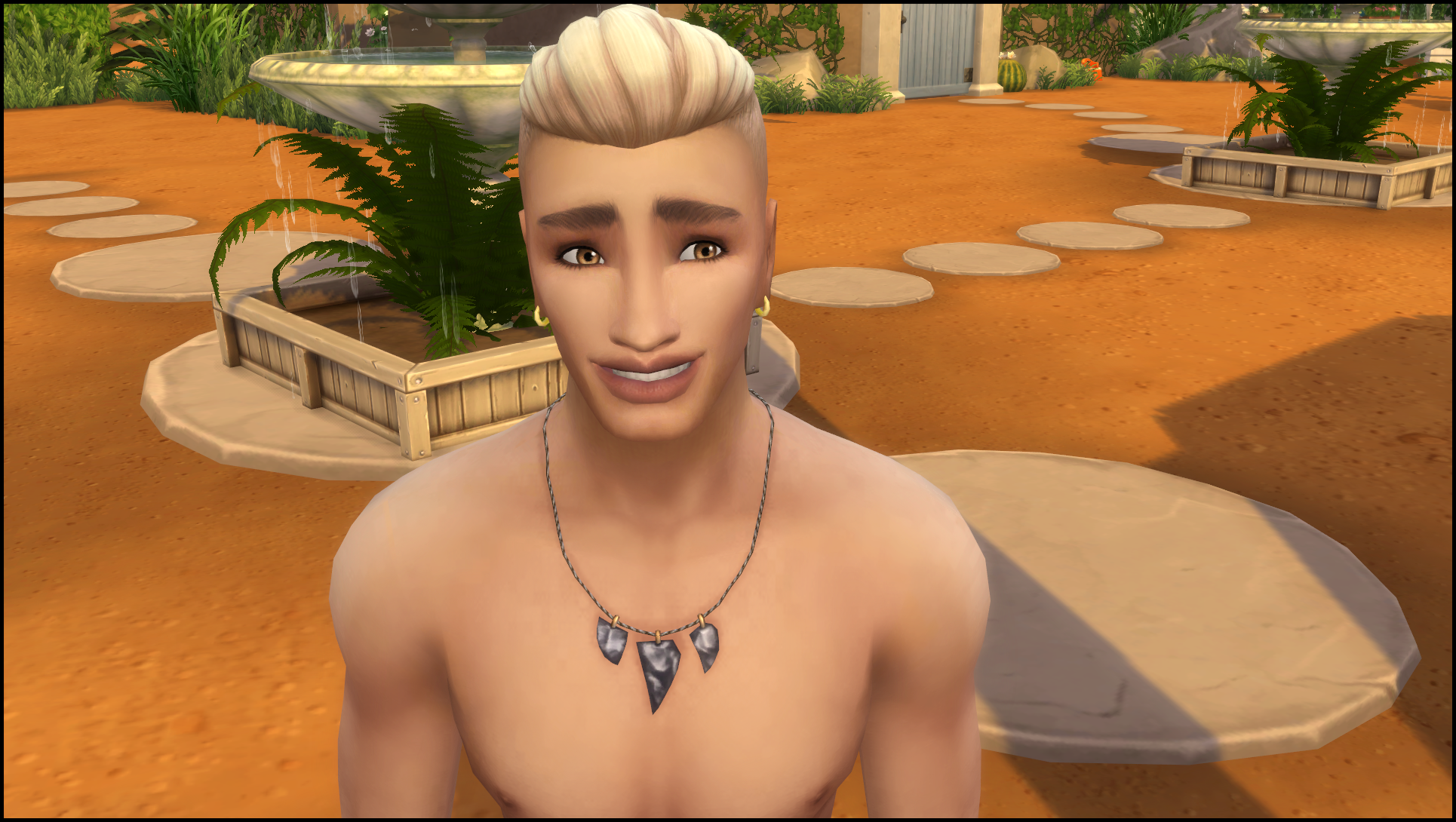 “It’s probably going to be pretty hard to tell early on, right?”

Kadhi nodded in agreement; a dark haired child would mean nothing either way, and he and Emil were otherwise similar in colouring. 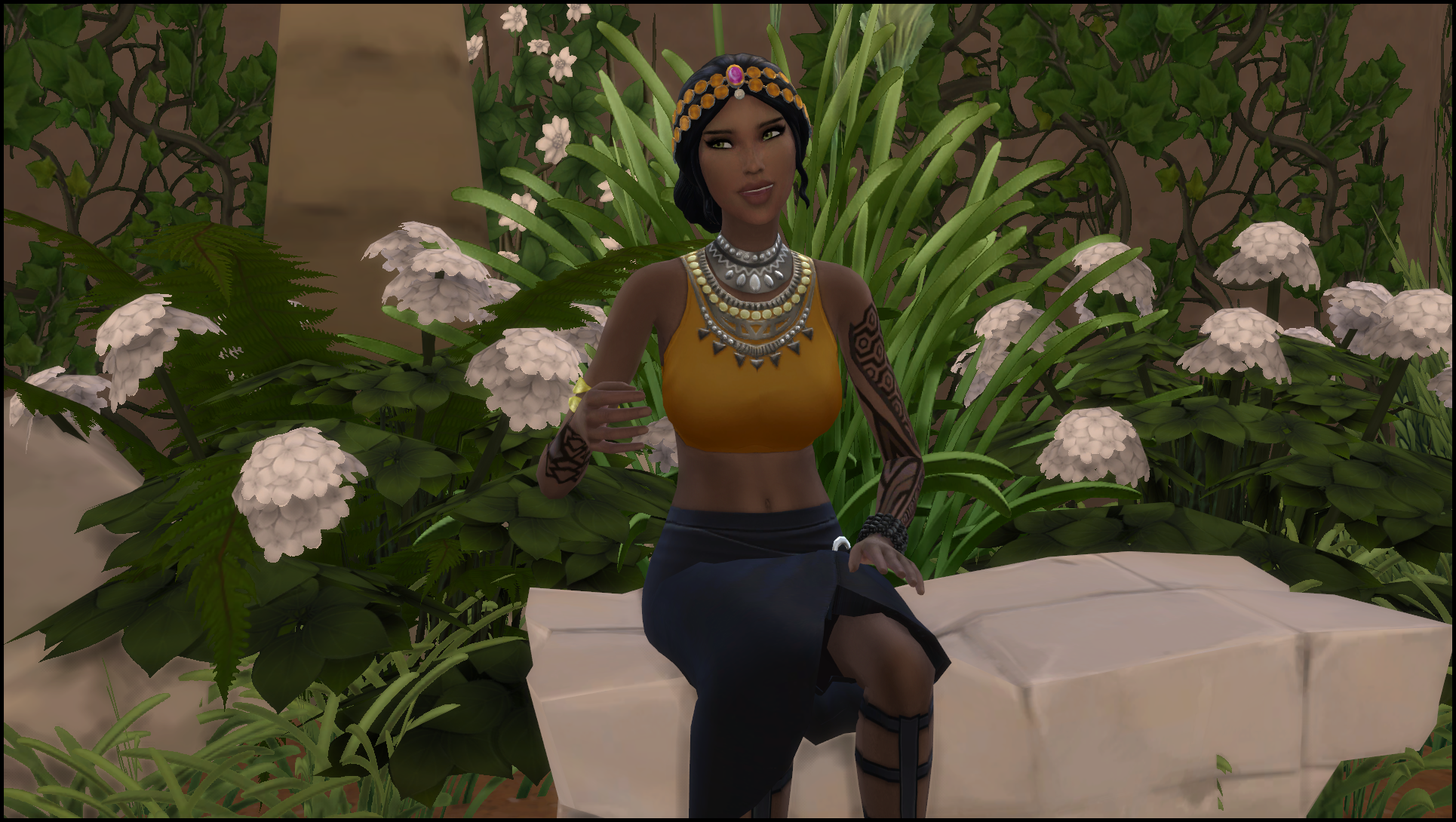 Bastet: “Well, if she comes out blond, I guess we’ll know she yours Emil…but is that even a thing when I’ve got black hair?.”

Bastet cannot imagine such a rarity as a golden haired child from a true daughter of Al Simhara like herself. 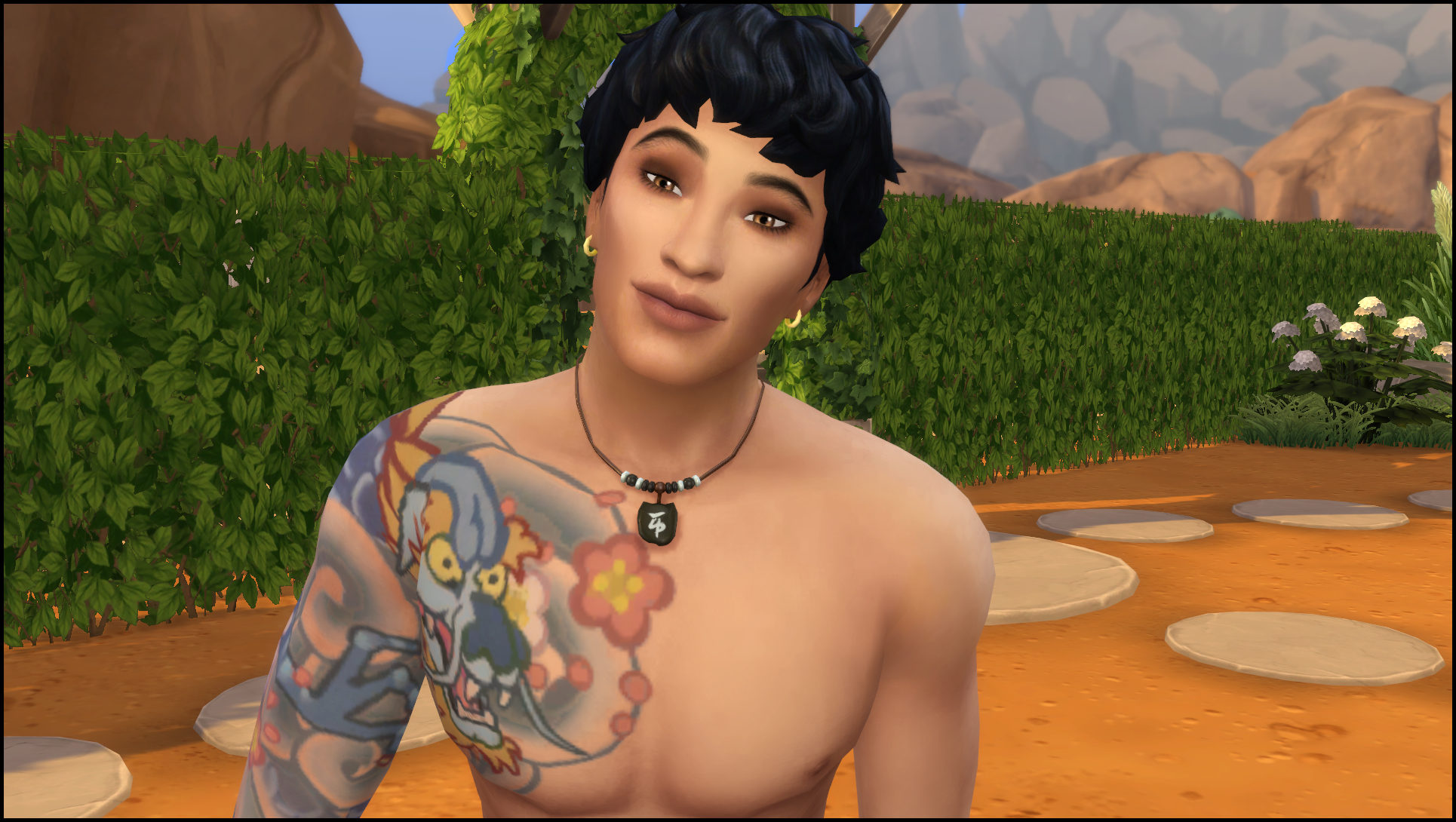 Kadhi: “Doesn’t matter either way, Majesty!  It’s just super exciting that there will finally be a baby in the tribe!”

Emil was quick to agree and Bastet felt the hand of the Goddess moving in this matter. 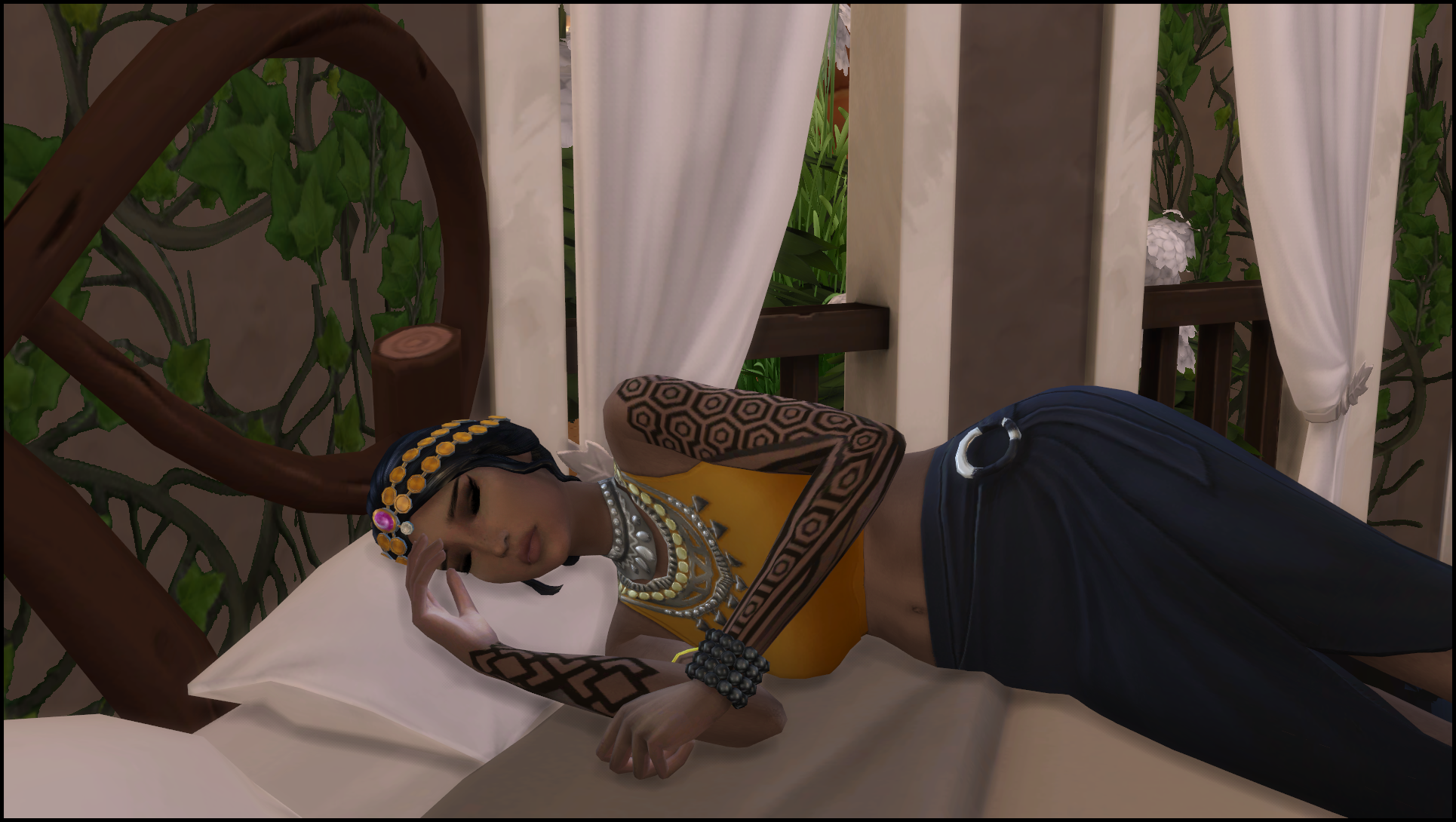 The pregnancy was very rough on Bastet; she was frequently ill and had taken to sleeping much of the day away. 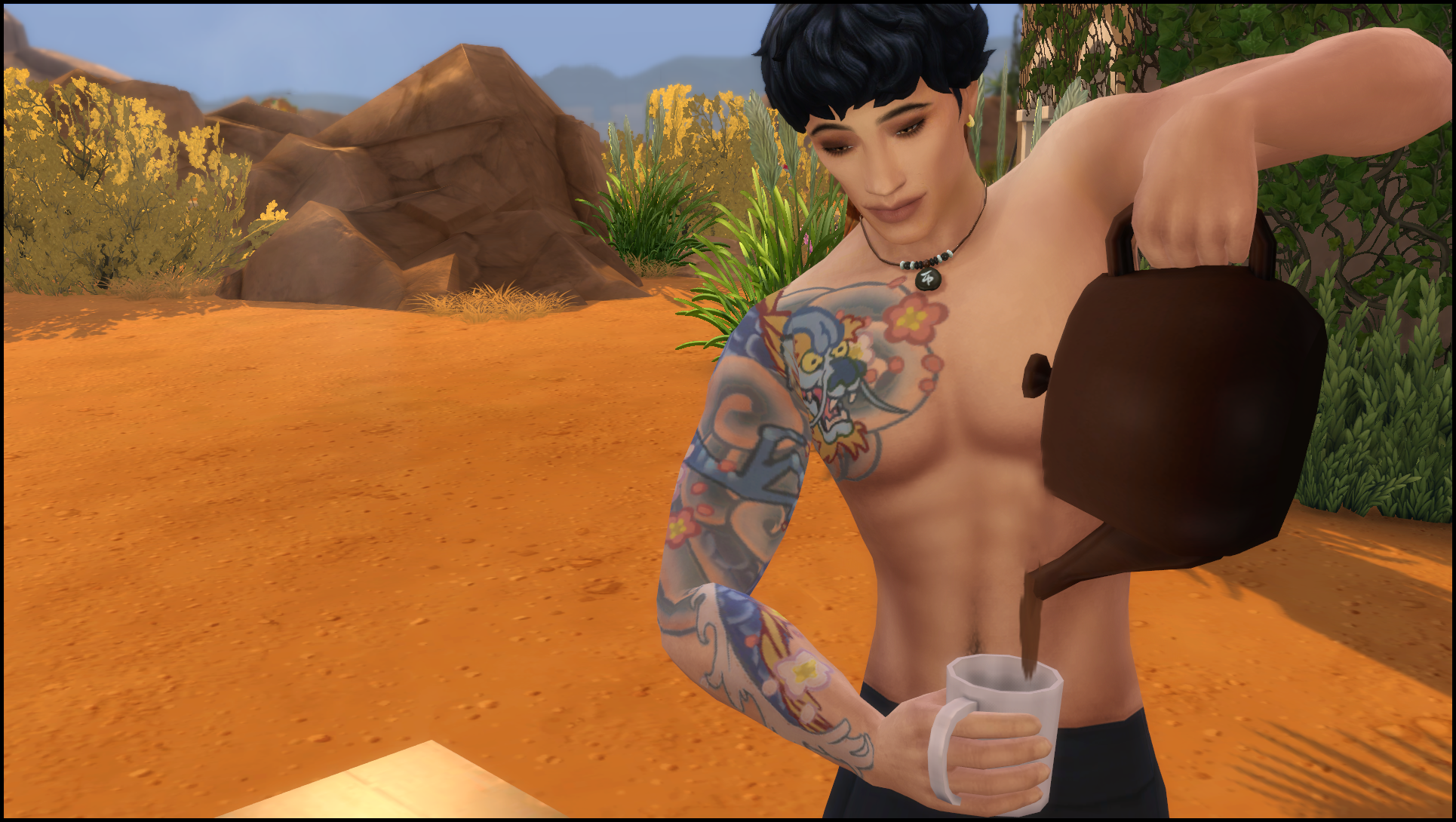 Emil, along with a recovering Kadhi, did as much as they could to help their mistress through this difficult time. 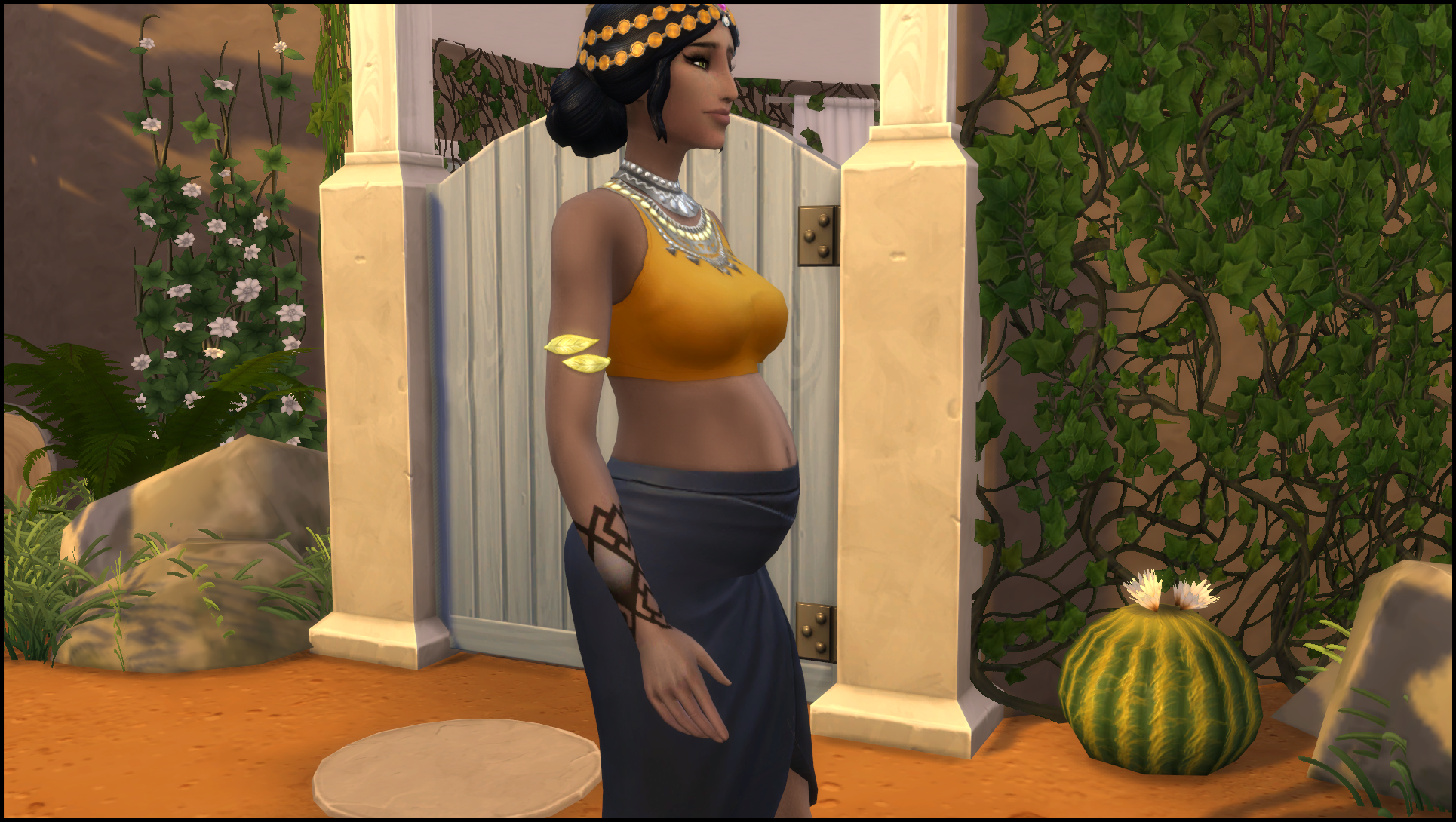 Eventually the worst of the sickness passed, and Bastet grew heavy with child until even crossing the garden to her easel was a burden… 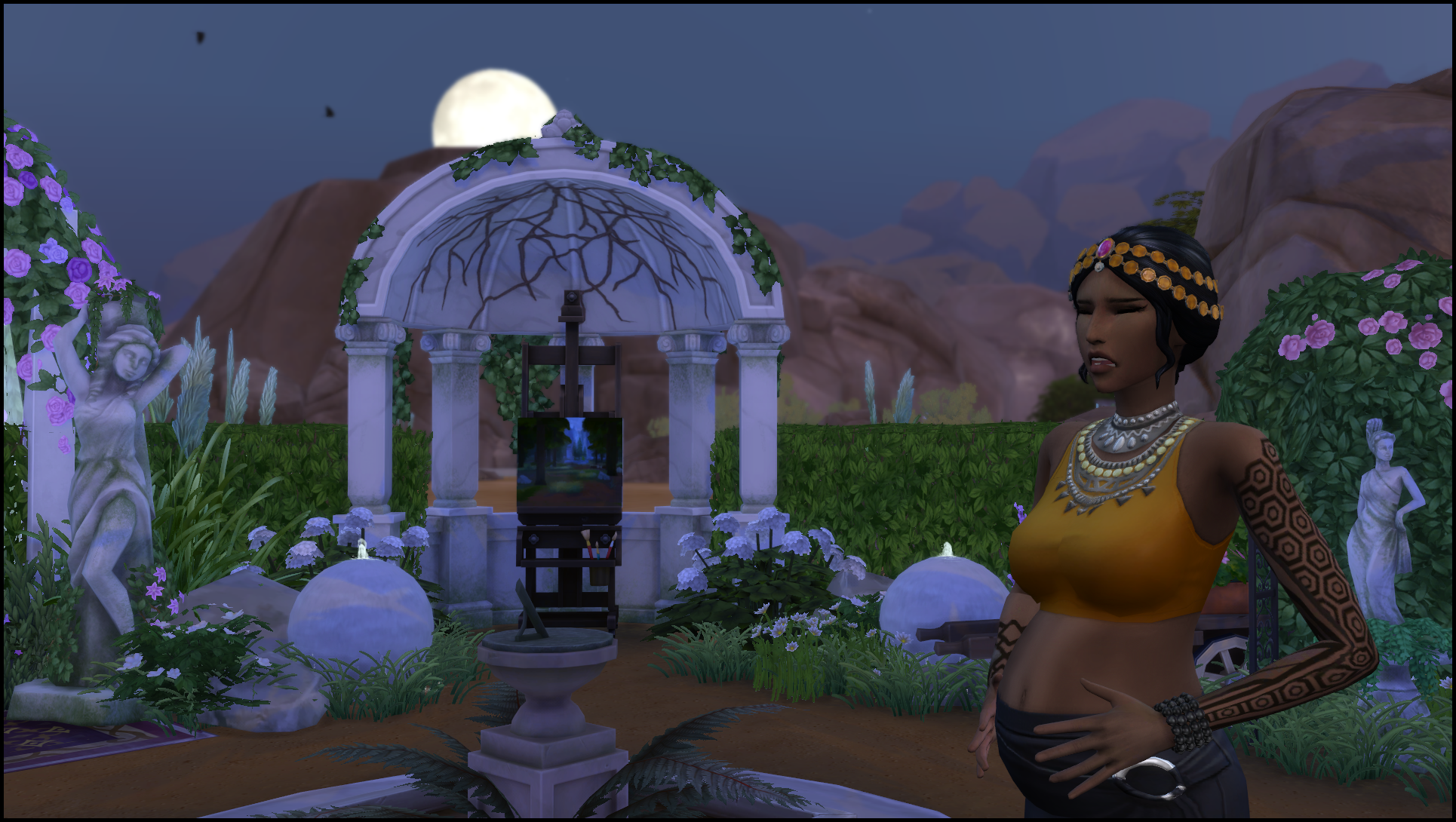 …and hardly a night passed where she is not awoken from her slumber by hunger pains and a full bladder. 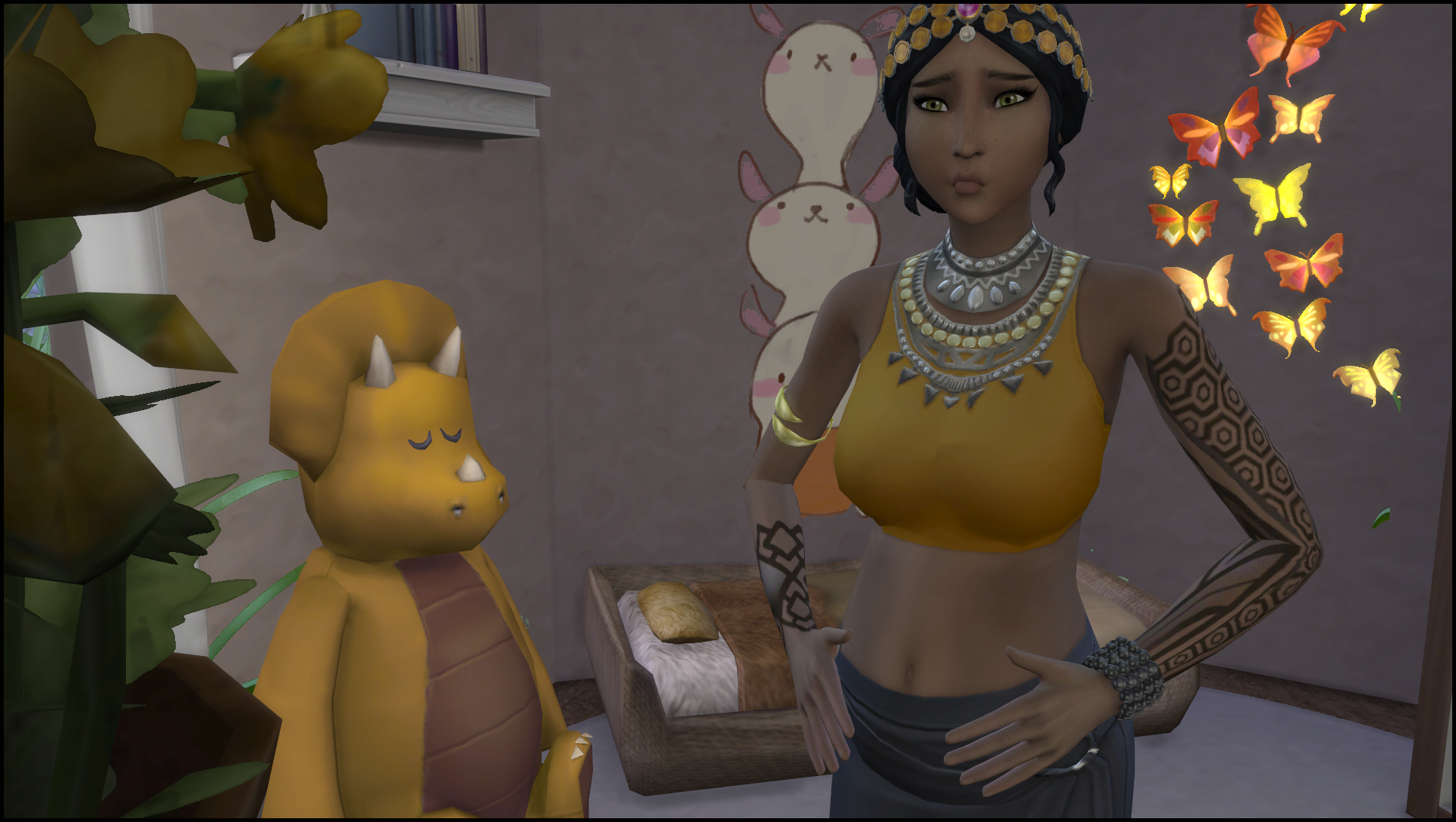 And one morning, she finally got her wish… 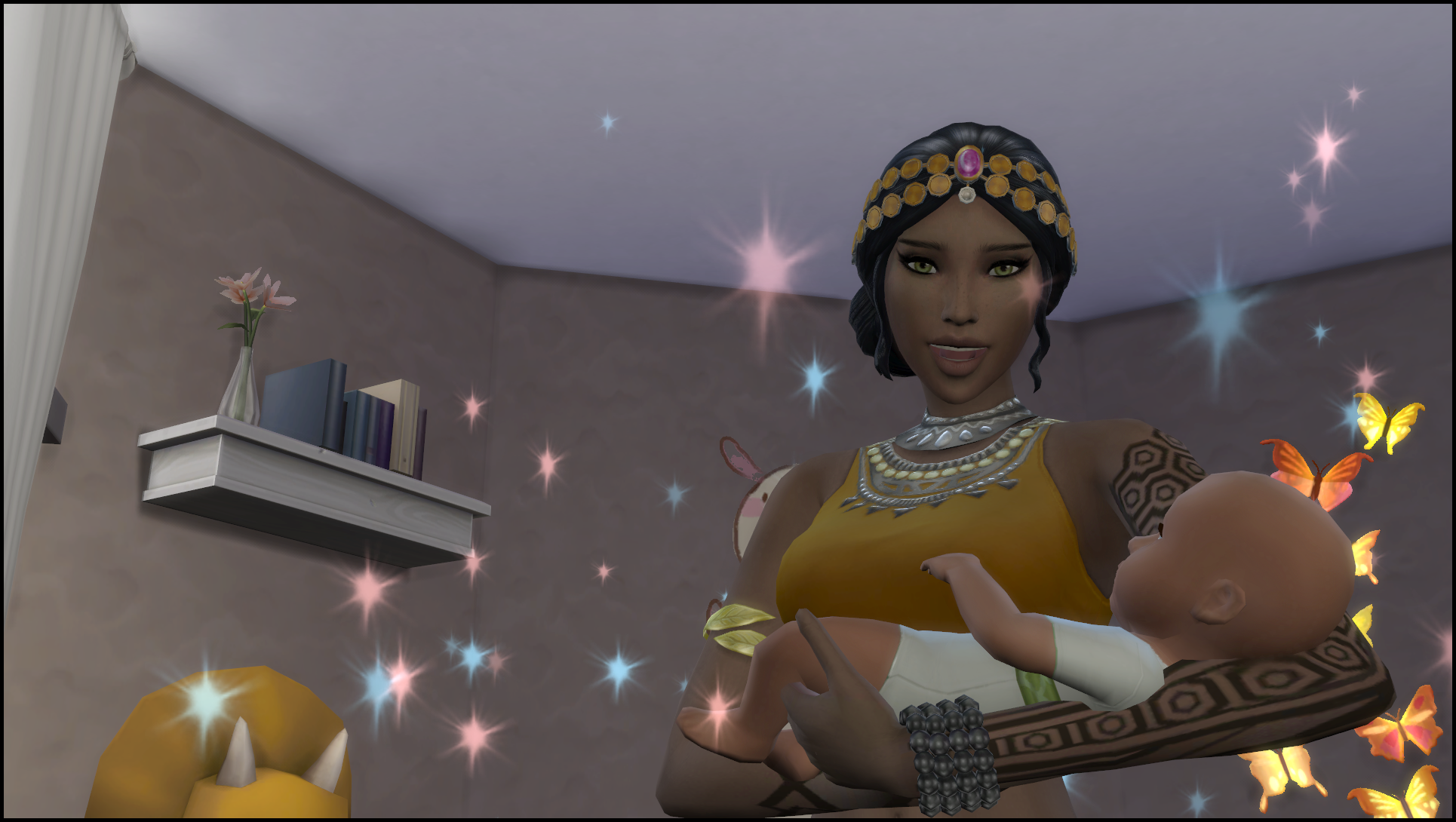 …in a manner of speaking.

And there could be no mistake that the father of this child was Emil, for his crown was as golden as a ripe field of wheat…and so Queen Bastet named her little prince Aten, for he shone as fair as the sun in the sky. 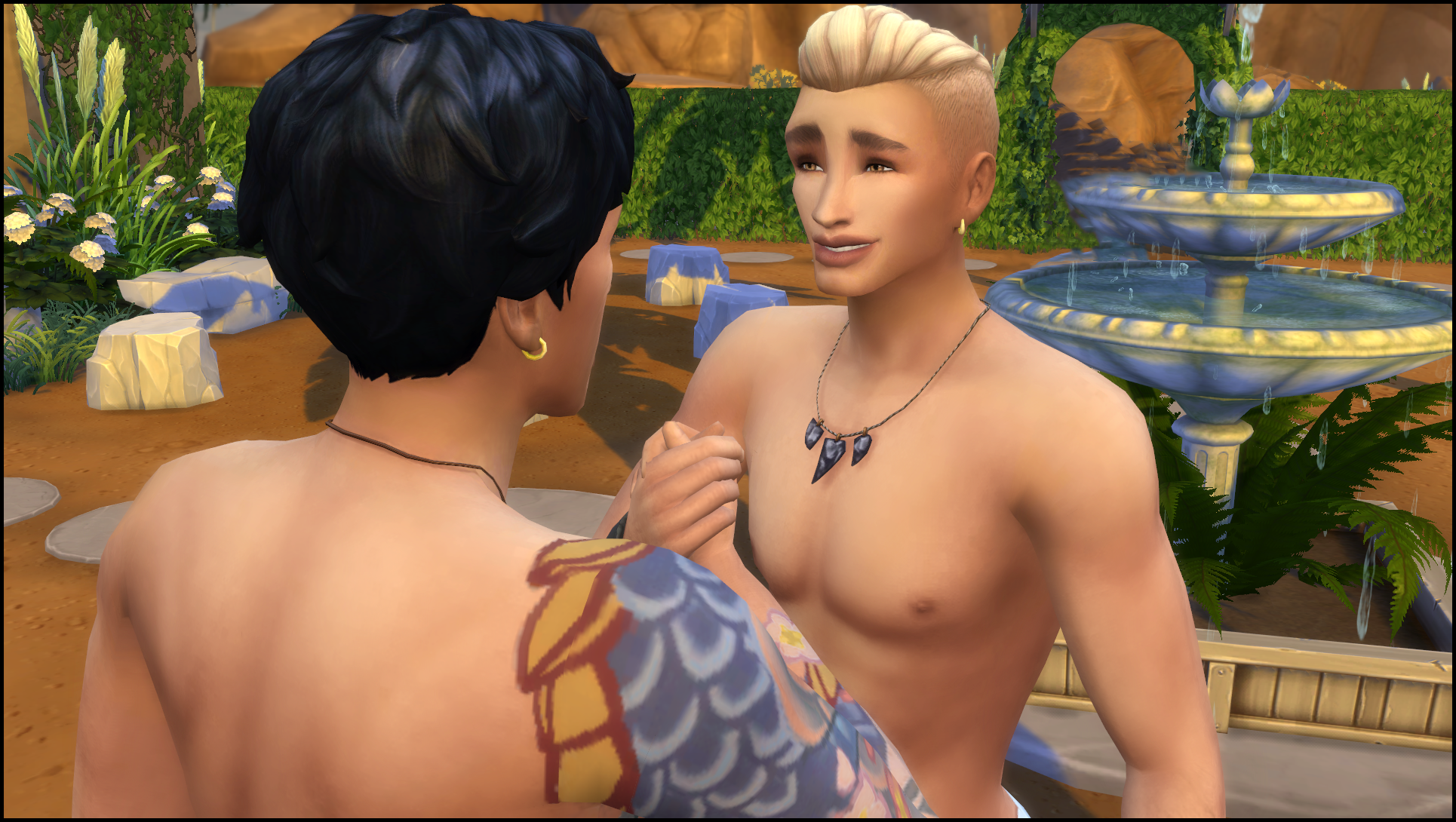 Emil’s heart swelled with pride when he heard the news of his beautiful son, and Kadhi embraced his friend in congratulations; this tribe was small, and even a boy child was a welcome gift. 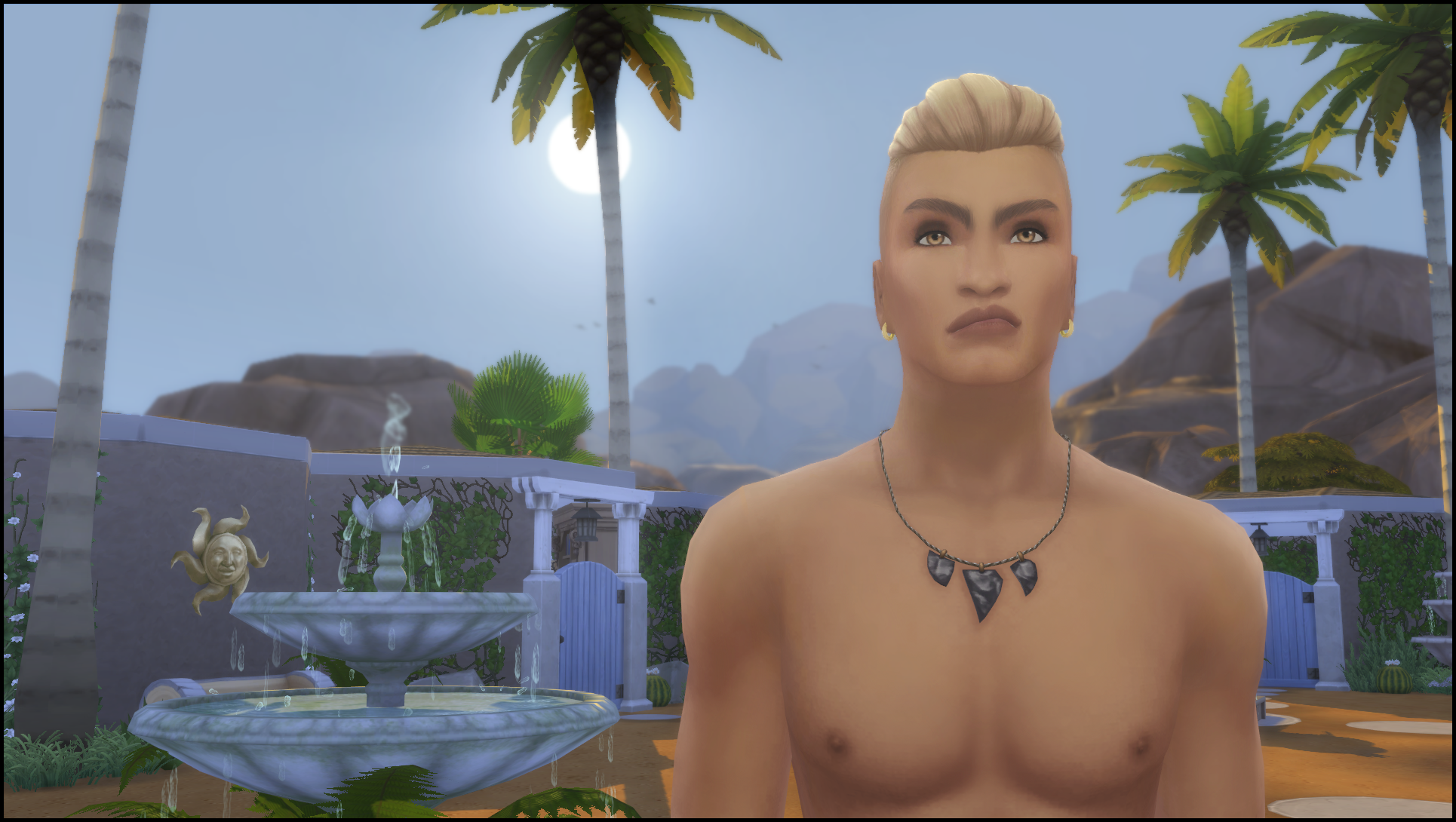 When the elation of Aten’s birth subsided, however, and Emil had a moment to himself, he found his chest tight with anger.

“Didn’t I serve faithfully enough, Goddess?  Didn’t I work hard for the good of my tribe?”

The slave felt that it was unfair that he should have fathered a son on his Queen and hoped he would not be sent away…or worse.

Curse you MC Command Center Risky Woohoo!  I had grand plans for my two boys to compete for Bastet’s favour; GRAND PLANS…but all for naught!
Oh well, we made it work…go with what the  mod throws at you, right?

Bastet and Kadhi were constantly sick throughout the whole affair (thank goodness for  green tea and naps), and our poor girl had a genuinely rough go at it. 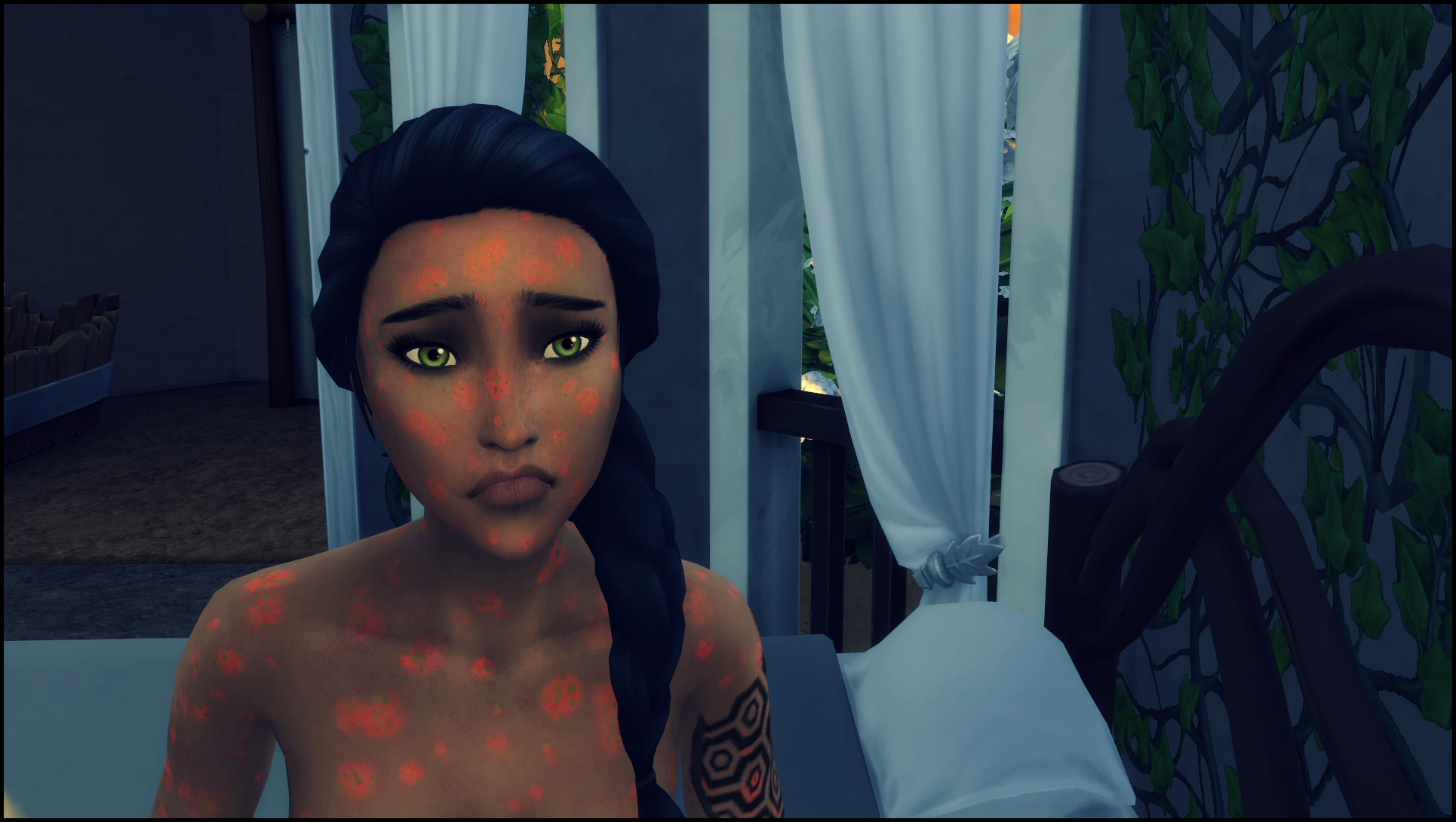