After 2 boys, Queen Bastet finally popped out the Princess she’d been longing for; I guess that sacrificing business really works!

Temulun is riding pretty high on her horse right now, being right about how to get Princesses and all.

Also Toro died and everyone had various feels about it…though it hasn’t stopped him from keeping in touch with his new buddy Kadhi, apparently. Athena had shown her pleasure at Bastet’s obedience. Every time she looked at her newborn daughter, the Queen became overwhelmed with joy… …she’d even succumbed to the temptation of doing a little celebratory dance.

(I’ve never seen a sim do this heel-clicky thing after giving birth; the happy is real, folks!) It wasn’t very queenly to flail about, (even when very, very pleased) but no one except little Maat (and probably Athena) was watching.

Bastet: “I can do this, Maat; we can do this!”  She whispered to her newborn daughter.  “One day, you will be a Queen.”

Saying it out loud sent a shiver through her body; she had a daughter at last, and they would build the greatest city the Amazon Civilization had ever seen…no, more than just a city; they would build an empire.

Bastet: “You will need sisters, my little treasure.”

While everyone was in good spirits from the birth of the Princess, the young Scholar felt she should capitalize on the moment, and requested a private audience with her Queen.

Temulun: “So now that we’ve got a Princess in the bag, I thought maybe we have a chat about some other rules and stuff, you know?”

The Queen felt her stomach turn to knots; something in the girl’s tone hinted at unpleasantness to come. Bastet: “I mean, I know, I should have sacrificed Emil and Kadhi when I got knocked up, but I’ve already had the boys, so there’s no point in sacrificing them now, right?” Bastet: “But they’ve been here since the beginning!  We built this settlement together, they’ve helped me raise my children…they’re like…like…family!”

Temulun knew she was treading on dangerous ground, but for the good of her Queen and their Tribe, it was imperative that she help the older woman see clearly. Temulun: “I mean, you’re the Queen, Majesty…we’ll do it however you want, of course, I’m totally on board!  It’s just that, you know, the rules are pretty particular on the subject of discarding breeding slaves, right?  And, yeah, there’s also that bit about how you’re really not supposed to get attached…that’s a pretty huge no-no I’m afraid.”

Temulun tried to couch her words in a smile, but she had a feeling she looked more like she was about to make water. Temulun nodded in understanding; so far this was going more smoothly than she had hoped!

Bastet: “I want to make Athena proud, and I know she likes the rules to be followed, so, okay, we’ll do something about Emil and Kadhi; they’re not super young anymore, I don’t think they’re worth a tonne, but we could take them to market and see.” Temulun braced herself for the next, more controversial issue.

Temulun: “Yeah, totally, we can figure out something like that…but there’s, eh, actually one more thing, sort of the whole reason I wanted to talk, you know?  And I’m not sure how to say it, so I’m just sort of going to blurt it out…when your boys reach adulthood they have to be sacrificed.” Suddenly all the Queen’s joy collapsed in around her.

Bastet: “You can’t be serious!  Sacrifice my children?!”

Temulun bit her lip, uncertain how to proceed.

Bastet: “Why am I only hearing about this now?!” Temulun: “I know!  I’m sorry!  I just…I mean, you can’t just walk into someone’s home and be all like ‘hey, how’s it going? Guess what; I’m here to tell you to off your kids! Cheers! Where’s the ale at?’…I needed to work up to it!  I’m not good at this kind of thing, Majesty!”

The girl felt her bowels turn to water; why did the High Priestess choose her for this task?  She wasn’t cut out to counsel Queens! Temulun fidgeted as her Queen burst into tears.

Temulun: “I guess this is why most of the royalty in Themysimra send their boys away to a temple to be raised; less attachment, or something.”

Temulun: “Look, this isn’t fair, we’re all alone out here!  There’s no where to send your boys…I’m sure Athena understands!  Maybe there’s some wiggle room somewhere?  I-I’ll look for a loophole or something!” Bastet: *sniff* “You think there even is one?”

Ignoring the fact that if there were loopholes other Amazons would have found them by now, the Queen was willing to cling to even the smallest hope. Temulun: “I may be a terrible councilor, Majesty, but Athena sent me here for a reason, and it wasn’t to make you all depressed…I think.”

The Queen looked small and defeated in that moment, and the Scholar knew it was her doing.

Temulun: “Anyway, like I said before; you’re the Queen!  We do it your way, okay?  Not that I’m all for sticking it to the Goddess or anything, because, wow…no…totally not the way to go unless you’re looking for a big old volcano to go spewing down all over you…” 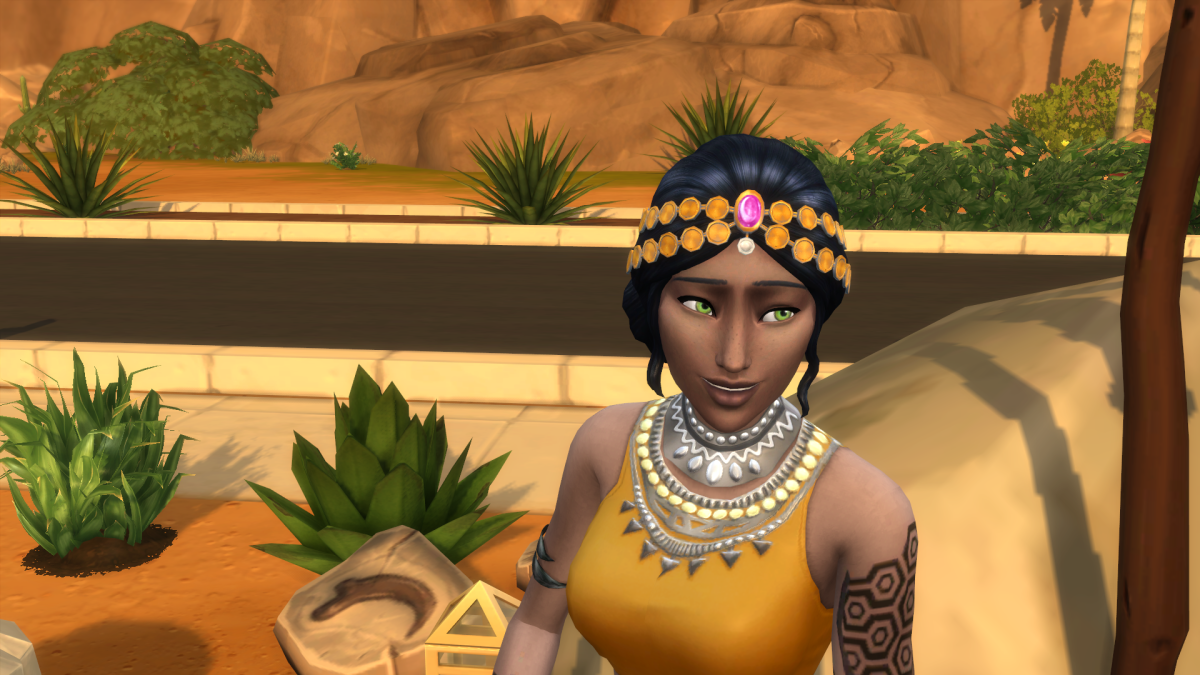 Bastet: “I understand, Tem, and thank you for being on my side; we’re neither of us perfect, but we’re in this together, and I’m so thankful that Athena sent you to help me.”

Red-eyed, but with her composure mostly restored, the Queen took a deep breath.

Bastet: “I’ll do some thinking, you do some reading, and with the Goddess’s guidance, we’ll figure out the best solution, I know it!” Touched and bolstered by her Queen’s words, Temulun returned to her chambers to pack for the journey to the Crossroads Market; they didn’t have all their answers yet, but she felt as though they were headed in the right direction. The closest slave market was small, and many days journey from Sima-Mighdall, but the location was near a well-traveled trading route, and the merchandise on offer was always varied, exotic, and well priced. Temulun arrived in the early morning with Emil in tow; the Queen had agreed, with a heavy heart, that he should be the first to go…though they had not yet told him he would be sold.

Kadhi was more skilled at looking after the garden, and cooking meals, and had a nature more suited to caring for children, as he was nurturing and slow to anger; this made the choice between them rather elementary. 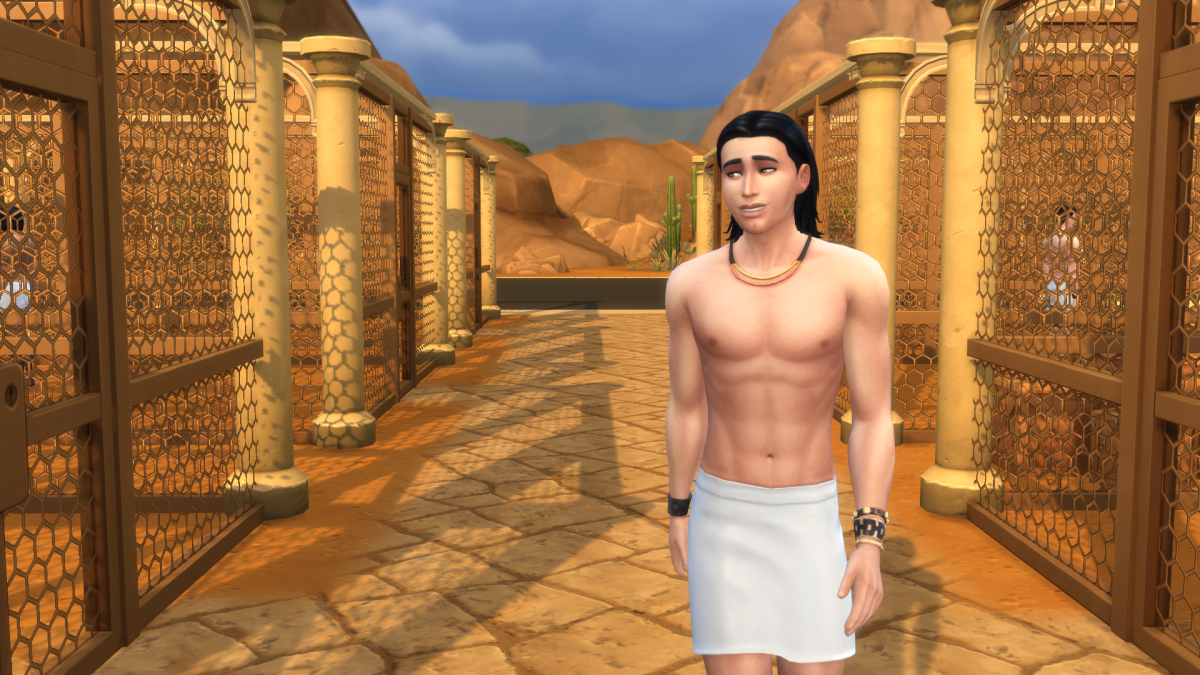 Temulun was greeted by a pale Al Simharan slave as they entered; this was no surprise, as the hour was early, and no doubt the Crossroads Master was still abed. Temulun: “Greetings, I am Temulun, Scholar of Sima-Mighdall; I’d like to purchase a male slave; nothing too expensive, mind, we’re on a budget.” 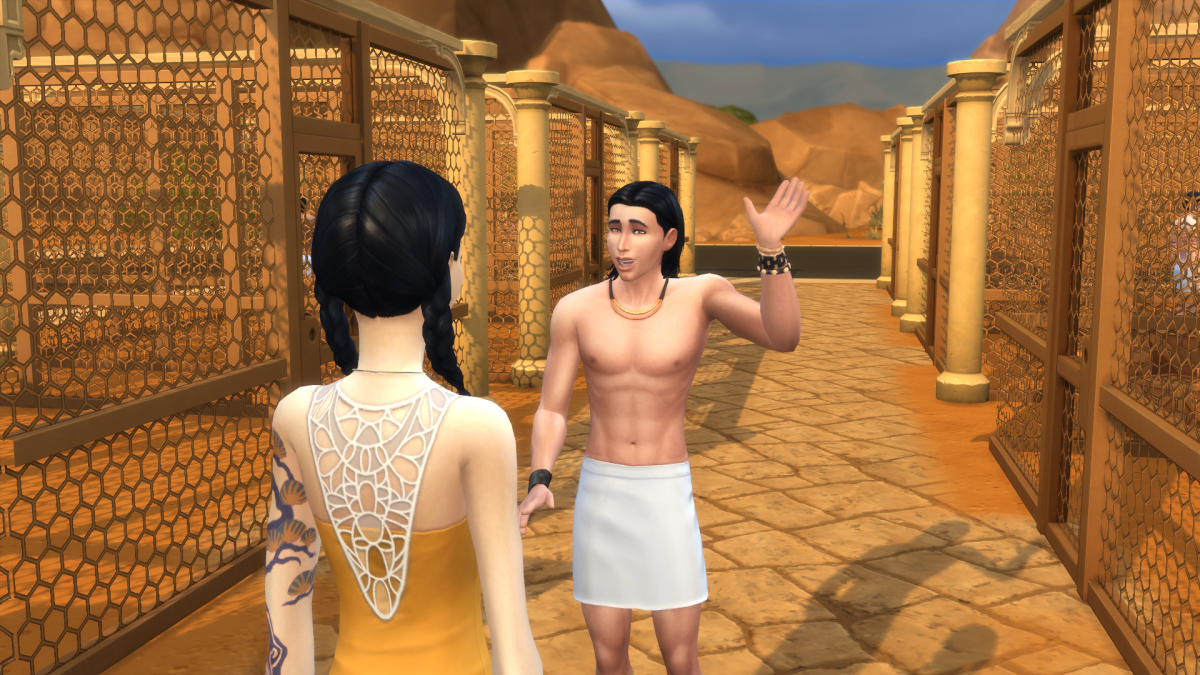 Slave: “Welcome, Scholar, I am Jahi, assistant to the Master of the Crossroads Market, I’d be happy to show you our current stock…anything in particular you’re looking for?  Or just the cheapest we’ve got?” Temulun: “Eh, well, he’ll need to be strong, and nice looking if at all possible…for breeding purposes you see…bred in captivity of course; no hostiles.” Jahi: “We’ve got a rather nice looking Pict in…hard to move the gingers, you know?  Some superstitious nonsense about them not having a soul…so he’s going pretty cheap; completely without skill, unfortunately, but those recessive genetics are always nice for breeding.” After the required amount of haggling, they settled on §1200 and the Pict in exchange for Emil; he may not have been the youngest of men, but all his hard work had paid off in a very respectable range of skills.

Out of curiosity, Temulun asked Jahi how much he himself was going for.

Jahi: “The Master would not accept less than §10,000 for me, I’m afraid; much time and great expense has been poured into my education.”

Temulun nearly coughed up a hairball at the thought; who knew there were slaves of such high value in the world! Temulun had expected Emil to be angry about being sold, as he was known for having a bit of a temper; but in the end he only looked very sad.  She promised him that Aten would be lovingly cared for, and wished him the best of luck in his next master. 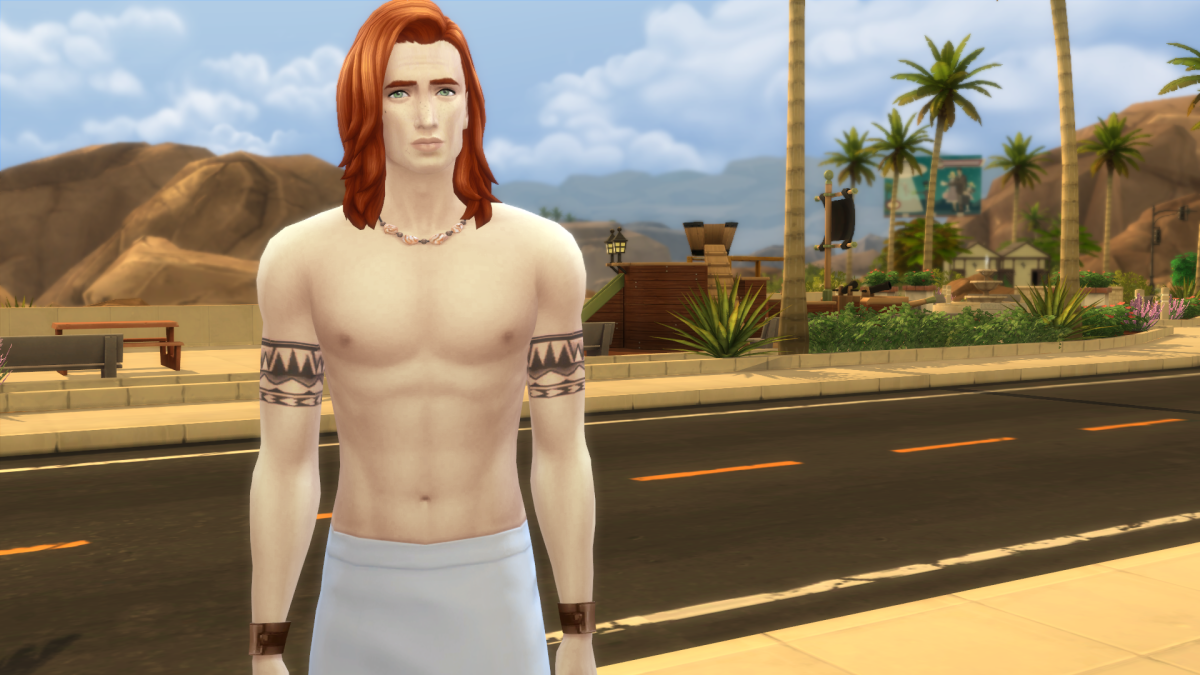 Branor of Pictland came cheerfully, and docilely, back to Sima-Mighdall with the Scholar; he was a bit on the silly side, but she hoped this would endear him to the children, and that the Queen would find him suitable.

Confession time: I sort of have a massive crush on Jahi. #NoOneUnderstandsOurLove Ghost of Toro: “Hey girl, you need a foot rub?”