Raet and Octavia enjoyed some grown-up girl bonding time despite the language barrier.

Pili got a surprise bab delivery from triflin’ SimCat and her hot jubblies; that’ll learn him not to illegally impregnate simselfs (maybe).

Also, Aten spent quality time with Yaretzi (who shares toys) and Totec (who shares bodily fluids), but not Bakari (because biter), and he tried to work off some of the (possibly imaginary) post-baby flab (because hormones).

Young Octavia was not super impressed with the selection of toys available in Sima-Mighdall, but, ever the optimistic little cherub, she tried to make do.

Octavia: “Oh, yaaay, let’s play in the rock pool, then maybe we’ll stand on the other rock for a bit…so fun…”

It’s not that she remembered having funner toys, but something in the back of her mind was instantly dissatisfied with rocks and sticks…still, better than no toys at all?

Despite the scarcity of fun toys, the addition of Octavia to the Tribe was seen as a blessing by all, and perhaps most especially by the Themysimran Shaman.

The girl was uncharacteristically chipper, bright, and sweet, and would flourish under Caris’ tutelage…they were, after all, in sore need of Tribal Daughters in Sima-Mighdall.

Bastet hid it well for the most part, but her health was on the decline; the elixirs that Caris brewed for the Queen were no longer as effective as they had once been, and she was sleeping most of her days away.

Caris knew that the Queen suspected her of adding poison to the medicines, but what possible good would come from poisoning one sad, old woman?

When Kenza had taken Corabella and left for Goddess-knew where with the eldest daughter, Caris had felt abandoned and resentful; but now she saw that this was a blessing from Athena, a chance to prove her worth by making the Ancestral High Seat of Amazon Al Simhara a place of greatness once more.

And the Shaman of Sima-Mighdall would do whatever was needed to achieve that goal.

It was not in Caris’s nature to be a kind woman, and perhaps she did wish some ill upon Bastet (the haughty creature who treated her like a leper), but despite this, the Shaman had decided to do her best by the Princess Raet; and being the resourceful creature that she was, that was no small thing. 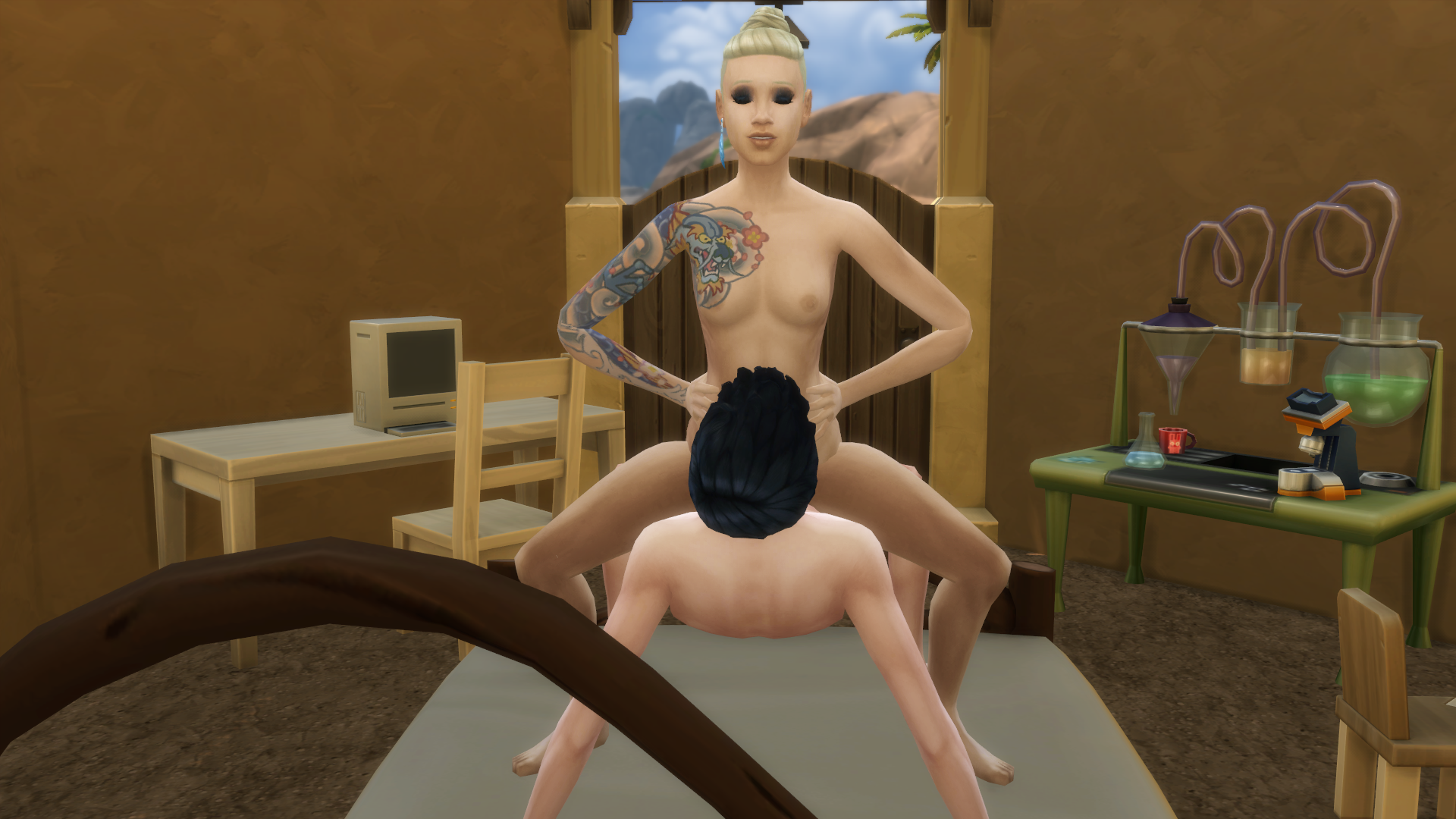 Caris took it upon herself to lure in a random heathen man (for a bit of strange squat-crab woohoo); there would be no sacrifice to the Goddess for this child, as she hoped to carry a son whom she could mould into a proper slave for the Tribe.

…he seemed oddly familiar for a male.

Kenza: “It certainly is…”

Antonia: “Are we going to go say hi?”

Antonia: “Are we going to stand here all day and stare?”

They’d been walking for several days, and were nearly the outskirts of the desert, when she’d seen the rise of the pyramid amidst the rocky terrain.

The Warden of Apep hadn’t been certain what she had expected to find, but certainly not her Queen’s escaped breeding slave.

Kenza: “This must be the Temple of Osiris…clever of her to send them here.”

Antonia: “I’m not actually sure if you’re talking to me or not.”

Antonia: “So just monologuing then.”

Kenza: “Did I say scorpion?  I meant rattlesnake.”

The journey so far had been kind of boring, actually, for Antonia…finding big ass pyramids with possibly escaped slaves gardening outside was totally a highlight.

Not that sleeping on rocks and walking endlessly in sand wasn’t a hoot.

At some point there was even supposed to be a learning experience on how to magically make new slaves appear for free; Antonia was pretty keen to see how Kenza was going to pull that shit off..but in the mean time, stalking was fun too.

Kenza: “We will stop for the day and make camp nearby; I need some time to think on this.”

Kenza gave the pyramid one last glance; Queen Maat would be most interested in this discovery.

For the third morning in a row, Totec found himself squatting over the luscious buttocks of Sima-Mighdall’s most disgraced son; though the bedding was still damp from their exertions the night before.

The children would awaken soon, and be wanting breakfast, but he couldn’t resist the urge to bury himself balls-deep in prince one last time before the sun came up; fucking Aten had become something of an obsession since the birth of their daughter.

The vampire bore down, fitting his body against the sun-kissed back.

Totec: “Is that good darling?”  He murmured.

Totec nipped playfully at his lover’s neck and withdrew, earning a surprised gasp from the young man beneath him; for all that the boy was normally a chatty beast, when they lay down together, he seldom said a thing.

The vampire flipped the prince over and set a more leisurely pace.

When had he begun to care for the silly creature as more than a plasma cache and a warm, tight, place to fit his cock?  Had it begun even before Yaretzi’s birth?

Somehow, at some time, this had grown into more while Totec not been paying attention; he found himself wanting to do something for the ridiculous manchild…something better than the fleeting pleasure of cool lips wrapped around one’s prick.

Aten clenched, and gasped once more, spilling fluid on his own belly; the vampire felt his stones tighten in response, and withdrew before he lost control and pollinated the poor thing again…

…perhaps they’d have another babe one day, but not yet.

With the garden green and plentiful, the children blossoming, and now a new Tribe member well on the way, Caris was deeply pleased with herself.

The Princess Raet, too, was delighted with the news of the impending birth; surely it was a good sign when the Goddess blessed them with the promise of new life?

Perhaps Sima-Mighdall was not so stagnant after all!

Raet: “Many felicitations on the upcoming birth of thine firstborn child, Shaman!  We are indeed most blessed by–”

Caris: “Thank you, Highness!  Just doing my part to serve our Tribe; I’ve made no sacrifices for this kid, hopefully the Goddess will see fit to bless us with a male child who can be raised to serve Sima-Mighdall.”

Raet: “It is well that thou didst not make sacrifices to our Goddess, Shaman, for it pleases mineself to do away with such barbaric practices when I am Queen–”

Raet: “Indeed!  I wilst see Sima-Mighdall ushered into a Golden Age of peace and prosperity!  Surely Athena wilst see my pure and tender heart, and she will–”

Raet: “While I do appreciate your candor, Shaman, I am quite determined to walk a path of temperance and compassion; I have the utmost faith that our Goddess wilst test mine faith, to be certain, but in the end She wilst find mine heart to be good and true–”

Caris: “In my experience, Highness, the Gods do as they please, and they don’t take kindly to us mortals going off and doing our own thing; fair warning.”

If it came to it, Caris would do what was necessary to save Sima-Mighdall from the whims of this silly little girl; could it be what Athena had intended all along?

Bastet squinted upwards, blocking the the sun with one arm.

‘What the blazes even was that thing?’

A oddly shaped, dark speck hung suspended in the endless blue of the morning sky.

Bastet: “Hey guys, there’s a massive black something up there…”

Kalvin and the heavily pregnant Caris continued to putter in the garden as though nothing were amiss.

Bastet: “That sure as hell ain’t no vulture!”  She cried, pointing as the thing descended upon them at an alarming rate.

And so it was that Bastet I, Queen of Sima-Mighdall, died at the ripe old age of 106 days.

“Gone – flitted away, Taken the stars from the night and the sun From the day! Gone, and a cloud in my heart.” – Alfred Tennyson

As much as I would have loved for my girl Bastet to have lived forever, the story demands for us to move forward.

Rest in peace my precious!  I don’t hand-craft very many sims, but you were one I made an exception for, and I will miss your awesome, expressive faces and your fabulous nose! 😦

Grim: *tries to glare at the sundial in a significant manner*