Queen Bastet got herself in the family way by Emil on accident, then popped out a golden-haired prince she named Aten.

Everyone except Emil got sick (apparently Emil has hax). The Tribe of Sima-Mighdall began to show signs of prosperity, and were finally able to construct a new kitchen arbour for the settlement (courtesy of Kiolometro’s Medieval Bakery).

Having recovered fully from his illness, Kadhi resumed primary care of the household and garden…

…while Emil returned to his full time fishing.

There had come to be an odd sort of tension between the two men, which had once not been present, and Kadhi was not certain what he had done wrong.

Emil would rise with the sun, eat, bathe, and leave for the water; seldom did he return before dusk, and he did not speak to Kadhi even when they were alone in their hut together. Kadhi took great joy in helping care for Queen’s son, and he would often keep Aten occupied while Bastet rested.

Kadhi: “Who’s a handsome little good omen?  Yes you are!”

Emil avoided the child entirely, never even having held him once. …and with Emil always away, it was not long before she chose to renew their former intimate association.

Some weeks after the prince’s birth, Kadhi noticed himself flush with heat. While Bastet began to experience dizziness and episodes of fainting.

It was not long after that the itchy spots appeared…

…and the Sima-Mighdall Tribe found itself once again in the midst of illness. Except, of course, for Emil.

Despite his poor health, Kadhi put forth the effort to set up a place in the slave hut for little Aten…

The days were arduous during the time of illness when there was a babe to care for, but eventually the spots succumbed to the ministrations of rest and medicinal teas… …and young Aten grew into a energetic toddler.

(Mom’s eyes, but everything else is dad..not what I was expecting!) Kadhi took the young child under his wing, letting the boy follow him around and “help” with the upkeep of the settlement.

Kadhi: “First, you make sure there’s a big puddle of water to stand in; then you fiddle around until you find the box where the lightning-magic is stored…” And when the day was done, the dark-haired slave always made sure his little prince had a bedtime story, and left a candle lit to chase away the darkness. 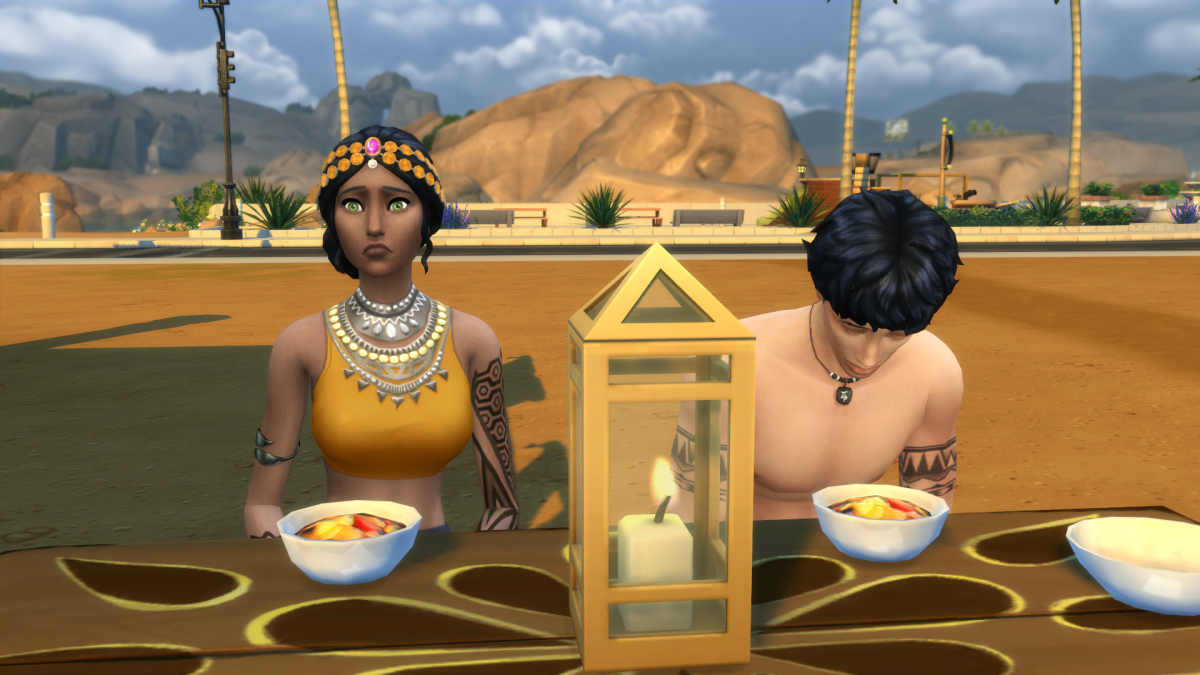 Bastet was troubled by the string of little misfortunes from which her tribe was suffering; illness, estrangement…unexpected bolts of lightning.

Kadhi: *tries not to fall into fruit salad*

Was it all a test, or was Athena truly displeased with her?

Disheartened, Bastet wished for nothing more than a big book of answers to fall from the sky and land at her feet.

Aten: *does not think this toy is historically appropriate*