Totec convinced Aten to stage a Great Escape, which went surprisingly well, and they even made off with Bakari!  But then everyone (except Maat) was sad and had feels about it.

Pili was cool and turned into a vampire; still cool.

Kids aged up and were really attractive.

Did I miss anything?  Oh!  LOL…Aten came down with a mysterious “illness” and some (expected) unexpected guests arrived to cause conflict and move the plot forward.

The sudden appearance of the Themysimrans in Sima-Mighdall had complicated life for the small Tribe.

Queen Bastet and the Warden Kenza did not see eye to eye on the proper governance of an Amazon Nation, and were often add odds with one another.

For Temulun, likewise, the arrival brought with it some complications.

Queen Bastet was not certain what had passed between her Scholar and the Shaman Caris, but the tension between them was palpable.

But despite the strain among the Themysimrans and Al Simharans, there was occasionally room for moments of joy.

Princess Raet grew into a lovely young woman with a fondness for works of art.

The scholar was thankful that none of the other Amazons questioned the paternity of this new babe, for they would be sure to object at Jahi’s having fathered all of her children.

The Seneschal kept himself removed, as much as possible, from the path of the Themysimran Amazons; with the assistance of the extra slaves, he was able to focus primarily on the garden and his children…

…as there were other things that could not be focused on while the strangers dwelt among them.

The Queen had cautioned himself and Temulun to be discreet while they were under the scrutiny of Kenza and her adherents, and so Jahi had taken up residence in the slave quarters once more.

Queen Bastet did her best to smooth over the clashes in opinion and temperament, but the burden of leadership wore heavily upon her as she entered the final stage of her life.

Now a young man, Pili had withdrawn from Sima-Mighdall to the Temple of Osiris, and had there worked diligently to restore the once grand pyramid.

By night he toiled on the grounds, by day he rested and restored the interior; it was his mother’s wish that this holy sanctum become the final resting place for herself and their family.

Long after his closest kin were gone from the world, he would remain; the eternal guardian of their remains.

Much to her mother’s chagrin, the young Heiress was easily seduced by Kenza’s flattery; the two women became fast friends, and the Warden’s influence over the Princess’s behaviour thrived.

Kenza: “I can see that you desire your Scholar Slave, Highness; you should claim him as the sire for your first daughter…in Themysimra, a Princess has the right to choose any slave she wishes.”

Maat: “You think so?  I mean, he was pretty expensive; I think mother would shit a brick if I did that.”

Kenza: “A fine offering for the Goddess; surely she would bless you with a mighty Princess…Sima-Mighdall is a prosperous Tribe, your mother can afford to replace him.”

Queen Bastet knew that her window of opportunity was closing quickly.

Bastet: “Kenza is pretty bound and determined to take over this place using Maat; Tem, I want you to take Jahi and your children and go to Pili at the Temple…you need to do it now before I lose control over my daughter entirely.”

At first, Temulun protested at leaving Sima-Mighdall, but was forced to relent when confronted with the Warden’s plans for Jahi.

They waited until the rest of the Tribe was asleep to make their departure.

Raet looked on with a heavy heart as Bastet and Temulun embraced for the final time; Sima-Mighdall would not be same without the warm affection between the Queen and her Scholar.

Nafretiri was blessedly quiet in her father’s arms as they snuck out of the village, and twins in high spirits; they had never been outside of Sima-Mighdall, and it was a grand adventure in the making.

Bastet: “What will I do without her?”

Children aside, Temulun had been the love of Bastet’s life; her councilor, her ally, and above all else, her best friend.

Maat: “She won’t even tell me where she sent them!”

Kenza: “The Queen is clever, Highness, but Athena sees her disobedience; you will far surpass her in your reign.

Maat: “I should just take my money and split.”

Kenza: “And so you will, Highness, but not like a mongrel bitch with her tail between her legs; you will leave Sima-Mighdall as the Queen our Goddess intended.”

Kenza: “Well, to start, Highness, you will claim the Rite of Womanhood, without your mother’s permission.” 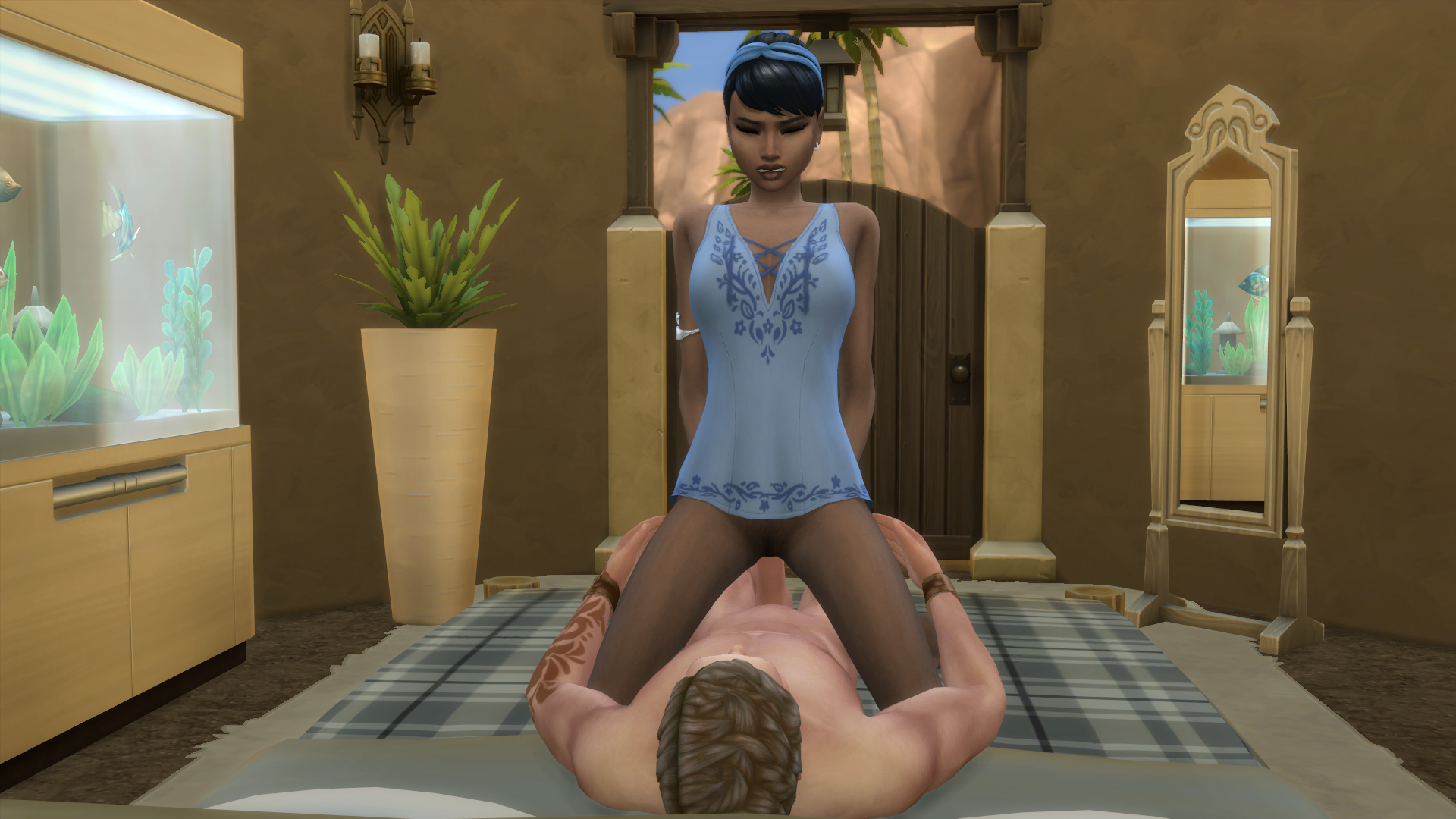 Kenza chose for her Princess the eldest of the Themysimran slaves; a pale-eyed westerner by the name of Anthony.

Maat had him on her mother’s bed the morning after Temulun’s departure, and while at first the experience was a touch uncomfortable…

…by the end, she’d managed to build up a fair amount of enthusiasm for it.

Bastet knew her daughter’s actions had been in defiance of Jahi’s escape, and chose to bite her tongue and not press the matter.

For all that she was still the Queen, the Themysimrans now outnumbered her greatly, and if they were to insist she step down, Bastet knew she would have to comply.

Some tense weeks passed in Sima-Mighdall, and eventually Princess Maat began to display the signs of gravidity…

…Anthony was committed to the waters of the Offering Pool.

The pale-eyed man lasted well over a day before succumbing to the Goddess; Princess Maat and her cohorts rejoiced at the blessing.

Bastet: “Congratulations, sweetheart, it really does make me happy to know that I have a granddaughter on the way; we might not always see eye to eye, but I am proud of the strong woman you’ve become.”

Maat: “Thanks mother, I know it’s kind of awkward, and Kenza wants me to ask you to step down and stuff…but you’re my mother!  I mean, I can’t just screw you over like that.”

Bastet: “Well, I appreciate that dear…”

Bastet: “…but I think things are only going to get worse with her and I living in the same Tribe.”

Maat: “…so I was thinking that maybe I should go start my own Tribe sooner rather than later; there’s some good spots not too far from here, but far enough, you know?  Kenza says I’ll be fine to travel seeing as I’m not too far along, and we’ll leave you one of the slaves, and Caris to look after the garden.”

Bastet: “That’s generous of you honey, but do I even want Caris?  I mean, she’s one of them; no offense, but I’m not too keen on living with some cow who wants to overthrow me.”

Maat: “Caris is cool mother, she won’t make trouble; she just likes to dig around in the dirt, but she’s tough, you know?  She’ll look after you guys, and take care of Raet if anything shady goes down.”

Bastet: “Alright, I’ll take her on under probation…are you sure you’re up for this kiddo?  Queening is no joke.”

She was certain, as it turned out.

Queen Maat I considered the immortality of the fish in Emil’s Fine Gift…how did that even work?

Kenza and Corabelle had scouted out a small pyramid to the northeast which had once been a shrine to the Al Simharan God Apep; it was in need of some repair, but would serve well as her Seat.

Queen Bastet had been generous, also, with Maat’s share of the inheritance; they would not be able to afford any extravagances, but would live comfortably.

With Maat and her retinue departed, Sima-Mighdall once again fell into the easy lull of peace.

Thank you for sitting through this awkward, depressing chapter!

Fun fact; I earned every last penny of the money spent to buy Maat a snazzy (slightly used) pyramid of her very own!

Thanks to Rebuilding Oasis Springs Gen. 2 Pool Spouse Anthony Hernandez for being a s good sport!